Police seen on video pinning down, punching 19-year-old during arrest 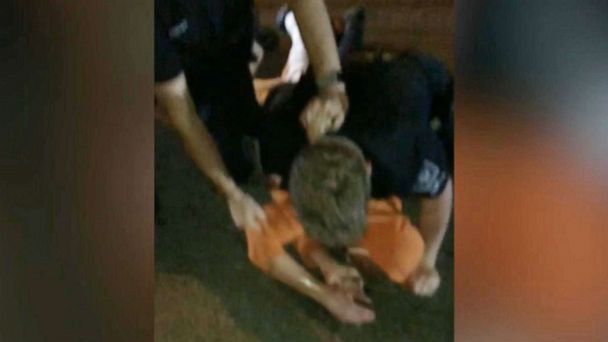 A video recorded during a violent arrest shows at least one New Jersey police officer punching a suspect who's pinned to the ground.

Cyprian Luke, 19, was apprehended around 2 a.m. on Saturday because of a warrant tied to a domestic case, ABC New York station WABC reported.

He and a friend were on their way to get a tattoo in Dover when the confrontation happened in front of a police station.

Luke told Lucy Yang of WABC there were "multiple blows" and "multiple macings" and that officers were "dragging me to the ambulance because I couldn't walk."

Luke, still in custody, is expected in court on Monday.

Christopher Luke told WABC his older brother wasn't resisting arrest and that he wasn't warned before officers descended upon him.

"They didn't tell him they had a warrant for his arrest. They just tackled him to the ground. They pepper sprayed him," Christopher Luke said. "He wasn't resisting at all. He was trying to cover his face, because they kept punching him."

The Morris County prosecutor is investigating the case under supervision from the New Jersey State Attorney General's office, WABC reported.

Dozens protested the arrest on Sunday night, including Luke's friend who shot the video.

"They was just beating the crap out of him," Marcus Robinson said. "They didn't give him a chance, because he really couldn't move."
Report a correction or typo
Related topics:
abc newsnational
Copyright © 2020 ABC News Internet Ventures.
More Videos
From CNN Newsource affiliates
TOP STORIES