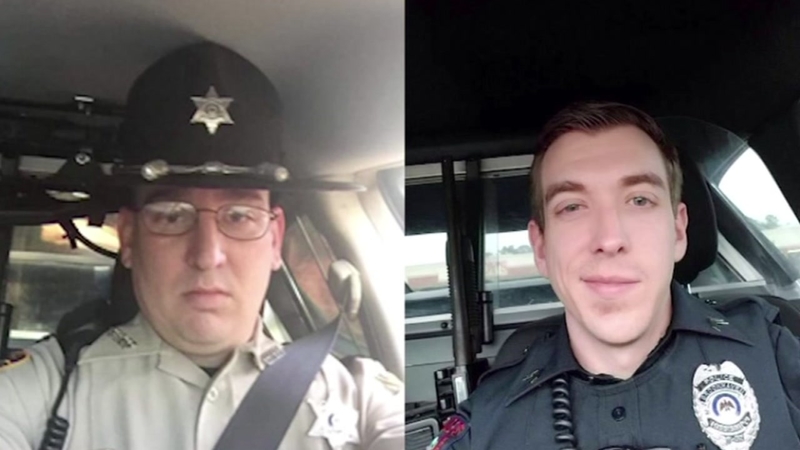 BROOKHAVEN, Mississippi -- Residents mourning two police officers shot and killed over the weekend in a small Mississippi city left roses, balloons and American flags in their honor Sunday, ahead of an evening prayer vigil.

The candlelight service for Officer James White, 35, and Cpl. Zach Moak, 31, was being organized outside the Brookhaven Police Department where the officers had worked. There, every few minutes, people would pull up in cars, leaving flowers, teddy bears and balloons not far from where their patrol cars were parked. Each car was adorned with an American flag and a wreath on its front grill.

On the police department's Facebook page, Chief Kenneth Collins called on area residents to turn out for the vigil "and honor these young men who gave their lives" serving the city of more than 12,000, located about 60 miles (95 kilometers) south of the state capital of Jackson.

Warren Strain of the Mississippi Department of Public Safety said Sunday that the shooting suspect, 25-year-old Marquis Flowers, was hospitalized after being wounded in the confrontation. Strain said charges are pending against Flowers and that investigation is ongoing. He did not provide an update on Flowers' medical condition.

Strain had said previously that the officers were called to a house in Brookhaven at about 5 a.m. Saturday for a report of shots fired. Following an exchange of gunfire that left both officers "mortally wounded," the two were pronounced dead at a local hospital, Strain said. He identified the weapon used as a handgun but wouldn't elaborate on the circumstances surrounding the shooting.

On Sunday, children jumped on a trampoline not far from the shooting scene at a Brookhaven duplex. What appeared to be several bullet holes in the aged blue siding of the duplex were pointed out with evidence markers by investigators. What looked like blood stains marked the ground steps away.

Friends of the officers said they were preparing for their funerals.

Hanna Hux, a Brookhaven resident who has known White since she was 12, called him one of her "oldest, dearest friends." She said he was first on the scene where the shooting occurred and is stunned by his death.

"Everybody needs to come together and support one another rather than fighting against one another," she told The Associated Press after leaving flowers beside both officers' squad cars. "We need lots of prayers." Though she couldn't make the Sunday vigil because of work, she said she was planning to attend James' funeral later in the week.

This is the second time in as many years that a law enforcement official has been killed in the line of duty in the Brookhaven area. Last year Lincoln County Sheriff's Deputy William Durr, who also spent four years with Brookhaven police, was responding to a call when he was shot to death. Authorities said the gunman shot and killed seven other people in a killing spree in and around the Brookhaven area.

Willie Cory Godbolt was arrested May 28, 2017, and is awaiting trial. He is pleading not guilty and faces the death penalty if convicted.
Report a correction or typo
Related topics:
mississippipolice officer killedu.s. & worldpolice officer
Copyright © 2022 by The Associated Press. All Rights Reserved.
TOP STORIES
51-year-old on the run as suspect in corporal's ambush killing
Sergeant was to walk daughter down aisle until his hit-and-run death
Mom shares story of son's 'scary' battle with COVID complications
H-E-B's Scott McClelland retirement and what's next
Drying out but staying cool this week
New security director aims to improve safety for Jewish organizations
IRS changes you should know before submitting taxes
Show More
Cause of death revealed for 23-year-old woman found dead after date
Texas among states suing Google over claim it's misleading consumers
Man accused of stabbing K-9 in The Heights now charged
'We knew something big exploded': ABC13 recalls moment of Watson blast
12-year-old hurt in crash with speeding tow truck that killed 2 adults
More TOP STORIES News