Student battling leukemia beats the odds and graduates with class 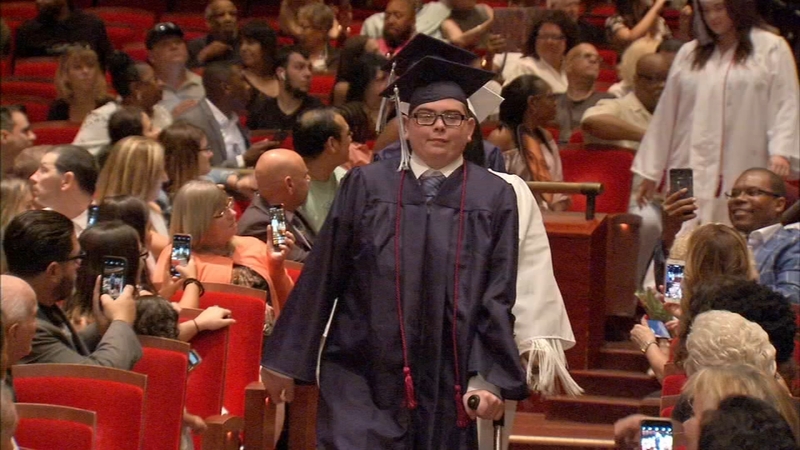 Student battling leukemia beats the odds and graduates with class

PHILADELPHIA -- At first glance, this is the typical sights and sounds of a graduation, that is until you meet Tom Sweeney, one of the newest graduates from Philadelphia Performing Arts, A String Theory Charter School.

"I want to be an inspiration to other people but I didn't think this many people would be interested in little old me," said Tom Sweeney.

Walking across this stage was no easy task. Sweeney spent nearly four years in Children's Hospital of Philadelphia battling leukemia. He was diagnosed when he was 13 and for him, surviving was the main goal; graduation was just the icing on the cake. He's been in remission for two years. Many say he's a walking miracle. His dad just calls him, superhero.

"I wouldn't say superhero, I like to just show other people and other kids and families who are going through this that it doesn't have to limit you. Having cancer, it doesn't have to stop you or make it to where you can't do everything just like everyone else," Sweeney said.

Mom, Debbie Reilly, admits at times she didn't think her son would survive.

"Every possible side effect you could get, he got it. He had to have total body radiation and then he relapsed and then had had to have a bone marrow transplant and then last year he had bilateral hip replacement due to the chemotherapy eating through the joints of the hips, but here he is today," said mom, Debbie Reilly.

Not only did Sweeney graduate high school, but he did it with honors and was also crowned Prom King. He spent countless hours at home and in the hospital room not just fighting his disease, but also studying. His family is beaming with pride.

A dream that is now a reality. With one chapter behind him and a diploma in hand, Sweeney says he's ready to face whatever life throws at him.

"There are days where you think man, this is a lot and it is tough, can I do it. You have to tell yourself I can and I will. It is the only way to do it," said student Tom Sweeney.

For Tom, this was more than just a graduation but it was his chance to shine and also for him to send a message about hope, determination and never giving up.
Report a correction or typo
Related topics:
educationphilly newsgraduationleukemiafeel goodphilly proud
Copyright © 2021 KTRK-TV. All Rights Reserved.
TOP STORIES
Astros head to World Series after ALCS win over Boston
What you need to know about Astros tickets, events before World Series
Can authorities prove if Brian Laundrie killed Gabby Petito?
Yordan Alvarez returns from double knee surgery to win ALCS MVP
Baldwin was told gun was 'cold' before movie set shooting
Houston Astros on pace for record beer year
'Bobby Dynamite' helps chug the Astros towards ALCS title
Show More
Don't get stuck in these traffic closures this weekend
20-year-old shot to death during break-in of Conroe home, police say
Arrest made in case of Alvin abduction, sexual assault of a minor
Rain chances increase this afternoon
USC suspends fraternity after alleged drug-facilitated sexual assaults
More TOP STORIES News