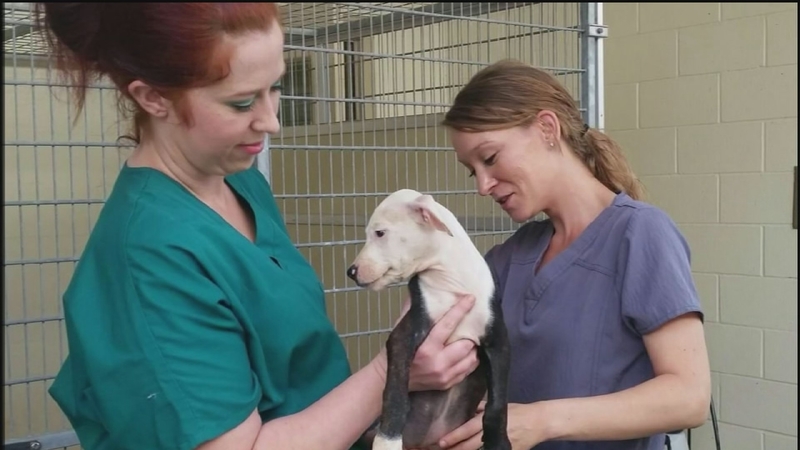 SANTA FE, TX (KTRK) -- An officer is recovering after a pit bull attacked him at a storage unit on FM 1764 in Sante Fe. But it was who else the officer found inside the storage unit that was the real surprise.

Police found a woman inside the storage unit. She was living there with two adult pit bulls and seven puppies that were just over a month old!

Santa Fe police got an unusual call from this storage facility -- a report of dogs barking inside a unit.

"There's dogs all over so I really didn't think they were coming from storage," neighbor Frances McIntire said.

Officers opened the door to the unit and found seven pit bull puppies, an adult male pit bull, and an adult female pit bull. They also found the dogs' owner, Bobbie Hicks, who they say was living in the unit.

As an officer went to talk to Hicks, the female pit attacked, clamping on to his forearm. He shot and killed the dog.

"It's not uncommon for a female dog of any breed, actually of any species of animal, to be protective of their puppies," said Scott Packard with the Galveston County health district.

"The adult male was pretty friendly, didn't cause a problem. So we were able to take him into our custody pretty easily. Same with the puppies," he said.

The dogs were taken to the Animal Resource Center. Police say their owner was taken into custody for outstanding warrants, but ended up at UTMB for some type of medical condition.

McIntire says there's been trouble here before, but she never imagined someone would be found living inside a unit.

"But if you don't have anywhere else to go and that's all she could afford, I'm not going to say anything about that. I just wonder how they do it," she said.

"For the dogs to return to her, she'd have to prove that she has proper living conditions for the animals," Packard said.

This dog had a history. Her owner admitted to police that this pit had been quarantined in February for biting another person.