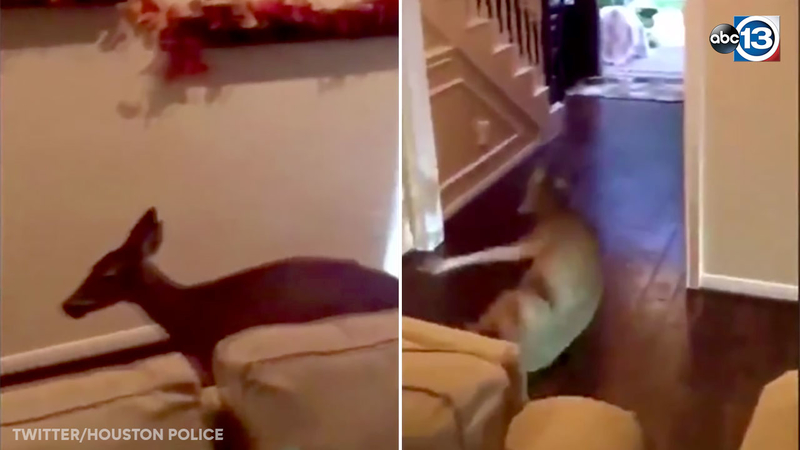 KINGWOOD, Texas (KTRK) -- This home invasion was truly out of the ordinary.

Eleven-year-old Emily White heard the sound of something hitting her family's home this afternoon and it quickly got her attention.

Then, she saw what was about to crash through a window: a young deer that had cleared a high backyard fence.

The deer first tested a large plate glass window facing the backyard and then moved to a pair of bedroom windows.

Moments later, the glass shattered and the deer was inside the bedroom.

"My sister and I ran into the backyard and stood on top of the trampoline when the deer got inside," she said. "We were scared."

First, she called her mother, who was picking up her brother from school.

"I asked, was there really a deer inside," recalled Michelle White. "And all of a sudden, it's jumping through the windows and she started screaming and then she hung up."

"I heard their police radio, and someone was asking them to describe the suspect," Emily said while laughing.

Her mother arrived and, with the help of officers, created a chute by rearranging the furniture to help herd the confused deer out of the home.

It slipped and skidded on the floors and was gradually guided to the front door. After a few moments, it bolted outside and to freedom.

"I looked and saw stories about deer getting into houses," said dad Gary White. "I hadn't really heard of that before."

His son posted the surveillance video from the home and his sister's cellphone video on YouTube.

HPD got the situation under control, letting the bewildered creature off with a warning.

The deer appeared to have a cut to its mouth from the broken glass, but no life-threatening injuries.