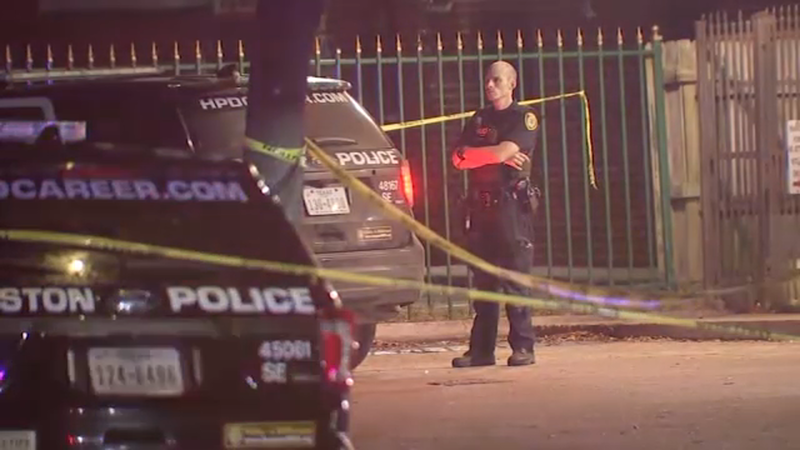 HOUSTON, Texas (KTRK) -- A pedestrian was struck and killed by a Houston police patrol car that was in pursuit of a reportedly stolen vehicle, according to authorities.

At about 5 p.m., officers received a call about an aggravated robbery on Bellfort Street. A 41-year-old Hispanic woman told officers that several young men robbed her at gunpoint and stole her purse and black Ford truck.

HPD commanders & PIO are en route to a fatality crash during a vehicle pursuit in the 9100 block of Scott St near Reed Rd.

Prelim info is a male pedestrian was struck by an HPD vehicle and, sadly, was pronounced deceased.

ABC13 spoke with the woman carjacked at gunpoint, but she asked to remain anonymous. She said she had put her groceries in the car and was sitting in the driver's seat with the door open when a group of young teenagers ran toward her.

The victim also said one of the young men pointed a gun at her thighs. She doesn't speak English, so she couldn't understand what they wanted. She gave them her phone and her wallet, but they started tugging on her keys. She got out of the vehicle, and they took off in her pick-up truck.

The mother of two started crying as she recalled the incident. She said she thought she was going to die and has been in shock.

According to police, the truck had a tracking system, so officers were able to find the vehicle on Scott Street near Reed Road.

"They turned around on the vehicle and the vehicle took off, and a pursuit began with lights and sirens," said Houston Police Executive Assistant Chief Larry Satterwhite.

The chase spanned several blocks and ended at an apartment complex on Barberry Drive. Police said five people were in the vehicle being chased.

Meanwhile, two officers trying to assist in the pursuit and arrest of the suspects struck and killed a pedestrian.

"As they were coming westbound on Reed Road, somehow they lost control of their vehicle," said Satterwhite. "We know they left the roadway, onto the sidewalk and ended up here."

The pedestrian was pronounced dead at the scene, according to police.

The victim, who hasn't been identified yet, is a Black man in his late 40s, according to police.

ABC13 obtained exclusive surveillance footage of the pursuit and crash. An HPD patrol car is seen chasing the stolen black pickup truck. Several minutes later, the other patrol car attempting to assist is seen crashing. The patrol car, going at a high rate of speed, crashes into a fence. The two officers are then seen running out toward the pedestrian.

The officers attempted CPR, but it was too late. According to police, the two officers involved with the pedestrian crash are 25 years old and have been with the department for less than two years.

Police said three of the five suspects were arrested at the nearby apartment complex and charged with aggravated robbery. The two other suspects ran off. The suspects left the truck running as they tried to run away. An officer suffered a minor injury but did not have to be transported.