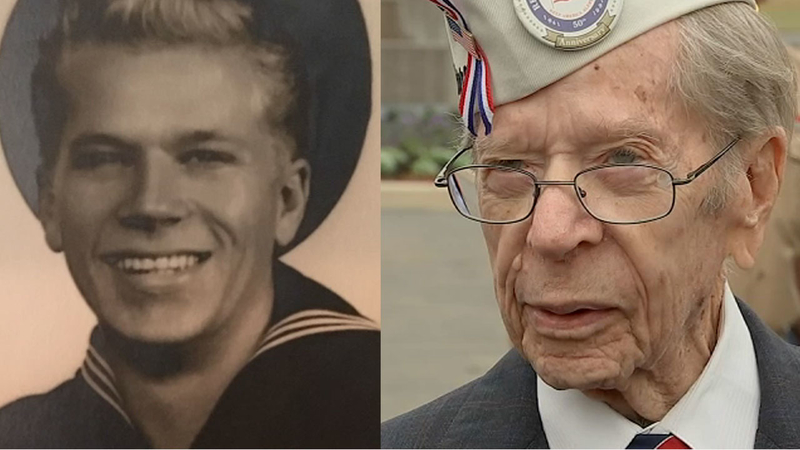 UPDATE: When this report originally aired and was posted online, we referred to Mr. Cook as Texas' last known Pearl Harbor survivor. That information was told to ABC13 by the Sons & Daughters of Pearl Harbor Survivors. Since then, we've heard from viewers who know of others.

We've heard of at least three survivors in Texas - men and women - who were bravely serving our nation in Pearl Harbor on December 7, 1941, and intend to follow-up with them. Their service should not be forgotten. Our intent was not to take anything away from their bravery. We thank them for their service.

Cook died Saturday. He was 96 years old. Cook was a kid from Fort Worth when he enlisted in the Navy in 1940 just eight days after his 18th birthday.

A year later, he was a 19-year-old stationed on Battleship Row in Pearl Harbor when the Japanese attacked.
"It was a pleasant day, just like all the rest of them," Cook told ABC13's Ted Oberg on Dec. 7, 2016, "Suddenly, we heard these airplanes coming over. Somebody said, 'What's going on?'"

Cook told ABC13 he thought it was a practice attack.

Once the bombs started exploding that Sunday morning, he and his colleagues realized it wasn't practice. Cook was getting his first taste of war on a day that would push him and his country deep into World War II.

Looking back on it at a Pearl Harbor commemoration at the George H.W. Bush Presidential Library, Cook told us, "Oh, goodness. I grew up in one day."
See Aaron Cook's Pearl Harbor remembrance from Dec. 7, 2016:
94-year-old Pearl Harbor survivor wants us all to remember that day
EMBED More News Videos

After the ceremony, Aaron's widow Marjorie Cook remembered, "He was a great storyteller, but he did not say much for a long time. I'd say it was 20 or 30 years before he'd ever talk about it. I think all of a sudden, it dawned on him what he'd been through. He was afraid that people were going to forget about that attack on Pearl Harbor. He wanted people to always remember that."

In 2016, Cook told us he frequently spoke with students. "I hope that they realize that, you know, it's something that we don't want to do again. Needless to say, I don't want to do it again anyway."