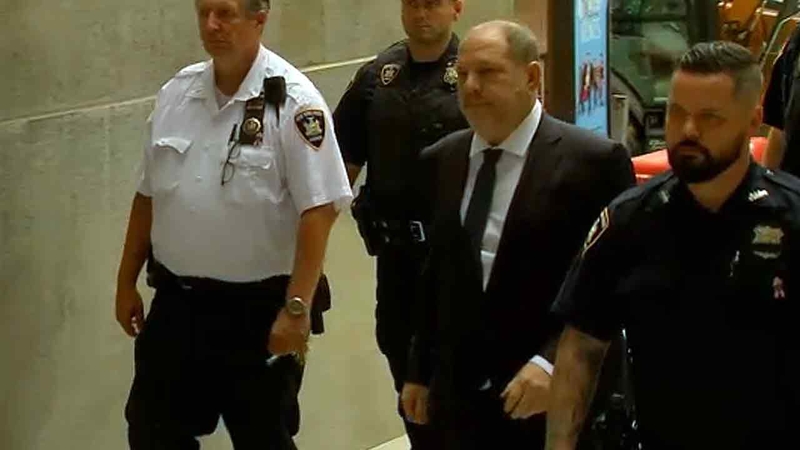 The development was announced in court Thursday with Weinstein looking on.

A judge agreed to dismiss allegations by one of three accusers in the case, Lucia Evans.

In a story published a year ago Wednesday, Evans told The New Yorker that Weinstein forced her to perform oral sex during a meeting at his office in 2004.

Remaining charges include allegations Weinstein raped a woman in 2013 and forced a sex act on a different woman in 2006.

Weinstein says he is innocent.

His lawyer, Benjamin Brafman, said in court that he believes Evans lied to the grand jury about what happened.

Judge James Burke issued rulings Thursday on defense motions seeking to dismiss some or all of a six-count indictment accusing Weinstein of rape and sexual assault.

Brafman said in court filings that prosecutors withheld evidence that would have made the grand jury think twice about charging him, such as friendly emails one accuser sent after the alleged rape.

The hearing comes a year and a day after The New Yorker first published allegations by one accuser in the case, Lucia Evans.

In the story, Evans accused Weinstein of forcing her to perform oral sex when they met alone in his office in 2004 to discuss her fledgling acting career. At the time, Evans was a 21-year-old college student.

Weinstein's lawyers and prosecutors had been wrangling over the part of the indictment pertaining to Evans' allegations over the last few weeks in closed-door meetings and sealed court papers. In one publicly filed document, prosecutors said they were investigating evidence that hasn't been made public.

Weinstein's legal team argued in court papers that prosecutors hadn't properly identified the day on which Evans alleged she had been assaulted. She told interviewers only that it had happened over the summer months between semesters at school.

"We know of no evidence refuting our client's report that Harvey Weinstein forcefully sexually assaulted her," she said in a statement.

While more than 75 women have publicly accused Weinstein of sexual misconduct over the past year, the criminal case in New York City involves the allegations of just three women: Evans, an unidentified woman who says he raped her in a hotel room in 2013, and an actress who said Weinstein performed a forcible sex act on her in 2006.

The New York City Police Department said in a statement it "remains fully confident in the overall case it has pursued against Mr. Weinstein. The evidence shows that the criminal case against him is strong."

Brafman has called the charges against Weinstein a product of political pressure amid the #MeToo outcry.

New York appeals courts have said prosecutors aren't obliged to present grand jurors with all forms of evidence that could favor a defendant, but the courts also have noted that prosecutors are obliged to seek justice and not just convictions.