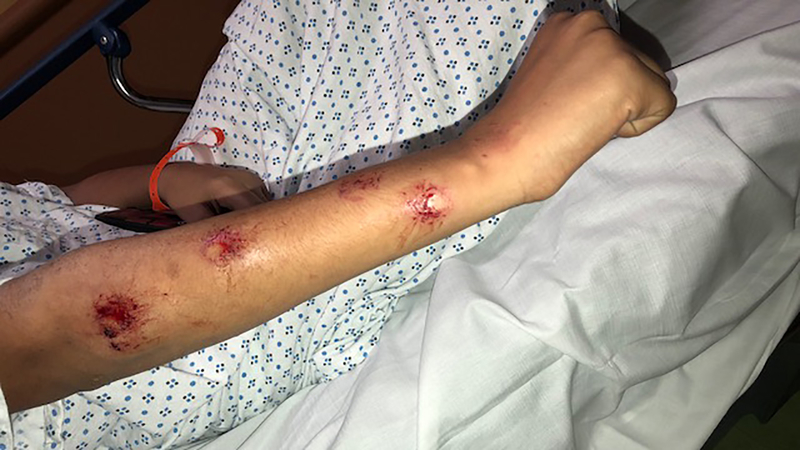 PATERSON, New Jersey -- A 14-year-old boy is hospitalized with severe welts after he was allegedly shot multiple times by a man with a paintball gun in New Jersey.

Paterson police say the boy was shot 20 to 25 times at close range, though the motive remains unclear.

The victim's mom, Carolina Vasquez, said her son was ambushed on his front steps with the high-powered paintball gun and had no time to react. She says he is now traumatized, with nearly two dozen deep bruises and welts all over his body.

Meanwhile, police are still trying to track down the trigger man.

"It's really upsetting," she said. "This person just came with this paintball gun, and he started shooting."

She says her son simply answered a knock at the front door and suddenly found himself staring down the barrel of the automatic paintball gun.

Towering over the eighth grader, the assailant fired nearly two dozen rounds at close range, relentlessly pelting the teen, who was paralyzed with pain.

"His lower back, his chest, his arms, his legs, front and back," she said. "They're deep, they're bloody, and they look black and blue and red."

Vasquez says her son believes the suspect is the older brother of a classmate, but just why anyone would do something so cruel and heartless isn't clear.

"Hopefully, we'll have a face to face in court," she said.

Paterson police are now investigating, and detectives spent several hours with Vasquez and her son Tuesday. She says while his physical wounds will heal, the psychological damage will take more time.

"He doesn't want to go back to school," she said. "He's scared. He's terrified. He says, what if this person comes and does something worse to me with a real gun?"