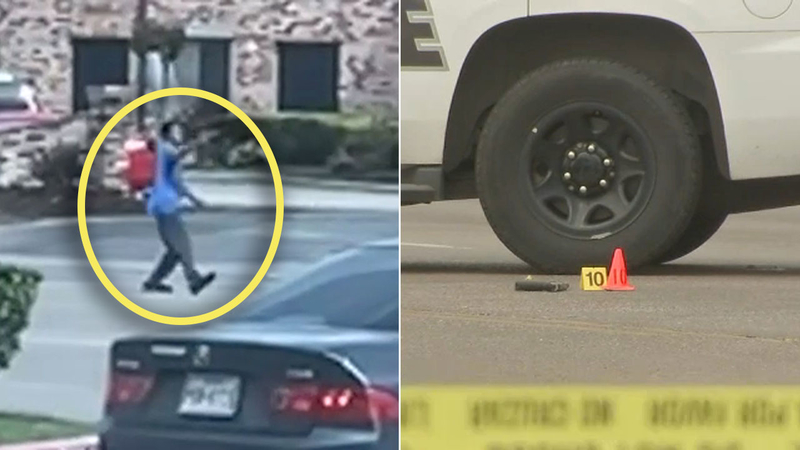 PASADENA, Texas (KTRK) -- Pasadena Police say officers shot a man to death after he refused to obey orders to drop his weapon.

The altercation began just after 10 a.m. Tuesday near the 3100 block of Spencer Highway. Police got a call from a resident concerned about a man pointing a handgun into the air near a Hartz Chicken restaurant. Within two minutes, officers responding to the scene say they encountered the man walking down the road with a gun.

Police say the man began to run from the officers. Police dashcam video shows they followed him in their patrol vehicle and told him multiple times to drop the weapon.

Video shows the man went into the middle of the road and turned back to walk toward the officers. That's when the two officers started shooting, killing the man.

"It made me startle and it made my heart go down below the ground," said Nayeli Clay, who works nearby. "I was just like, 'Oh my God, someone got shot.' And I turned around and saw him fall to the ground."

"Anytime anyone is walking around with a handgun, it's a danger to the public," said Pasadena Police Chief Josh Bruegger. "No officers are injured and we're still trying to determine if the suspect fired, but he did have the gun in his hand and was walking back toward the officers at the time that they discharged their weapons."

The man who died has not been identified at this time. The officers who shot him have four and seven years of service. As is standard in police shootings, they will be placed on administrative leave for at least five days before they can return to duty, the chief explained.

"They're both shaken up. I say this every time, but it's traumatic to take another life, no matter what the circumstance are, even if your own life is in danger," Chief Bruegger said.

Avoid the area of 3100 Spencer Hwy. All lanes of traffic are closed due to an ongoing investigation. #PasadenPDTX pic.twitter.com/jhp80KDGFH

Police will also be reviewing video from the officers' body-worn cameras.