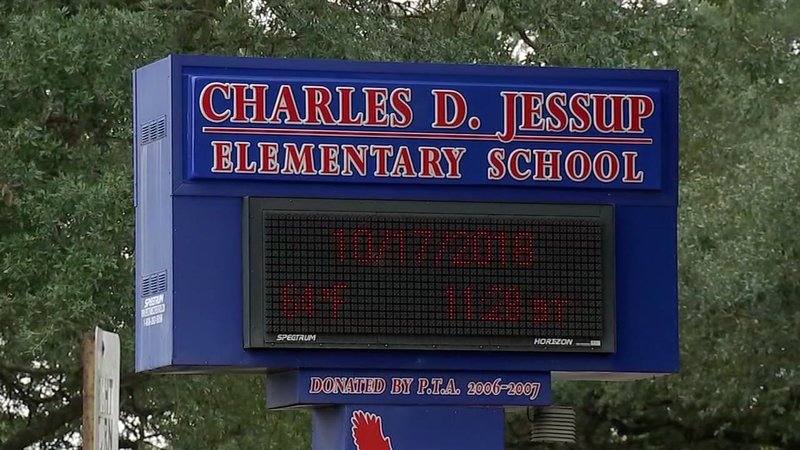 A substitute teacher no longer works at a Pasadena Elem. school after allegations of sexual misconduct.

PASADENA, Texas (KTRK) -- The parents of two elementary school students are demanding more from Pasadena ISD after they claim a substitute teacher sexually assaulted their children.

The substitute teacher in question no longer works at Jessup Elementary School. But parents say their kids are still suffering.

Ashley is one of several parents who say a substitute teacher molested their daughters during a fourth-grade class in early October.

Two of those parents spoke out with their attorneys today, saying the district needs to speed up the criminal investigation.

"This is about the safety of children, and these families have the right to have some questions answered," said attorney Darian Conston.

"It's been so hard for us, and my daughter has been going through so much," said Marlene, another mother of a fourth-grade girl.

Marlene's daughter is starting a home-school program next week.

Both parents say the school district is not acting fast enough on the investigation. So far, no charges have been filed against the former substitute teacher.

"This happened during school hours during class time," said attorney Brennan Dunn. "It's our understanding there are multiple female children called one by one to him."

On October 5, 2018, Pasadena ISD received allegations that a substitute teacher at Jessup Elementary School had touched students in an inappropriate manner. Pasadena ISD takes all allegations of this nature very seriously. Accordingly, the Administration at Jessup Elementary took immediate action to remove the individual from their campus, notify District Administration, Harris County Protective Services ("CPS") and the Pasadena ISD Police Department of the allegations, and began contacting parents of the reporting students.
The accused individual is no longer employed by Pasadena ISD. To date, the District has taken all available courses of action to ensure the safety of its students. In addition to the reports made to CPS and the police, the District has also provided notice of the allegations involved in this case to the State Board for Educator Certification.

It is important for students, parents, and our community to know that all PISD employees, including substitutes, are required to submit to criminal background checks prior to being hired by the District. This background check includes fingerprinting checks utilizing Texas DPS's and the FBI's databases. To the District's knowledge, the individual involved in this case does not have a criminal history.

The District is confident in the PISD Police Department's ability to perform a thorough investigation and we know that our police will work to ensure that any wrongdoing is prosecuted to the fullest extent allowed by law. We ask that you continue to remain patient while our police diligently work this case.