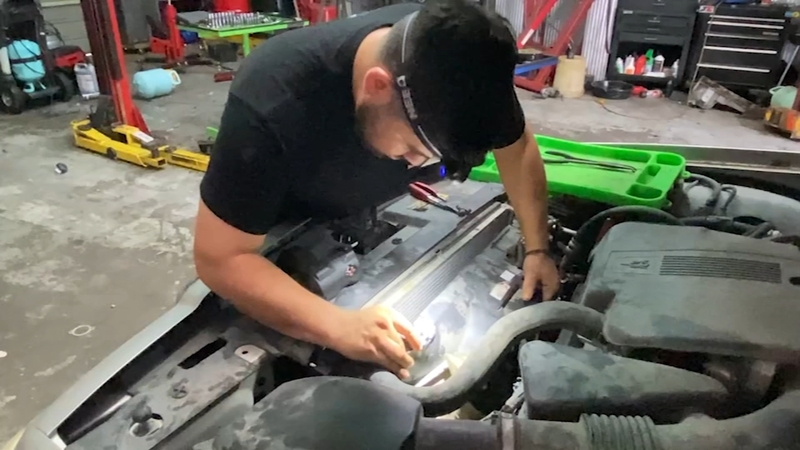 PASADENA, Texas (KTRK) -- The city of Pasadena approved an agreement on Tuesday with car mechanic Azael Sepulveda, allowing him to finally open his new shop.

Sepulveda, represented by the Institute for Justice, reached a settlement after filling a lawsuit in December 2021, allowing him to open his shop while his lawsuit challenging the city's mandatory parking requirement was pending.

"We're glad we could come to an agreement with the city that will allow Azael to open his shop and provide for his family," said Institute for Justice Attorney Tori Clark. "Every American, including Azael, has the right to start a business without being shut down by impossible demands."

"I'm incredibly happy with this settlement and I'm really looking forward to opening my new shop," Sepulveda said. "I've been working hard my whole life to get to a point where I can own my own shop. This is a dream come true."

Sepulveda, known as Oz, has owned Oz Mechanics in Pasadena for several years and he's been ready to expand. He said he found a building along Shaver Street that was previously a fabricating business that he could convert into his dream mechanic shop.

"We looked into it about a year ago, but being a small business owner, it's kind of hard to get loans and that's what we're trying to do," Sepulveda told Eyewitness News last August. "We're going through different banks, and we couldn't really find anything so, I had to put my home as collateral. We had to get a home equity loan to get this [building] here."

It would be the first building he's owned as a small business owner, but the city's new parking ordinance put that plan in jeopardy.

According to the city of Pasadena's planning department, in order for the mechanic shop to meet industry standards, the building would need 28 parking spots.

"Cities throughout the country have come to the realization that mandatory parking minimums like this one are harmful to small businesses and provide no legitimate benefit for the cities themselves," said IJ Attorney Diana Simpson. "Not only are unreasonable parking minimums bad policy, they're also unconstitutional."

Sepulveda said a new lot would cost him roughly between $30,000 to $40,000, and the current space could only allot for possibly 17 parking spots.

"I got a couple options I can do," Sepulveda said. "Selling my shop, and staying here and just go through it. Or, try to put the parking spaces in there, and hopefully not go bankrupt."

This new ordinance only applies to new businesses, not established businesses. At least two other local business owners contacted ABC13 stating they were having the same issue and requested a variance through the city to see if there could be an exception for their cases. Last December, Sepulveda said he too requested a variance and it was denied.

The city of Pasadena's planning department responded with the following statement on Thursday:

Our legal department does not have any comments.

No other business has submitted a variance request application regarding the city's current off-street parking requirements based on the number of required parking spaces.

It might be important to note that this is actually a 'change of use' situation. The property was originally permitted as a machine shop by the previous owner. Mr. Sepulveda has stated that he is using the property as an auto repair shop, which is a completely different use, requiring more parking and different permitting. Even if he was applying for a Certificate of Occupancy under the city's old parking ordinance, he would've been denied due to the lack of required off-street parking."
Report a correction or typo
Related topics:
societypasadenanew businesssmall businessbusinessmoneylost moneyparkinglawssmall business survival
Copyright © 2022 KTRK-TV. All Rights Reserved.
PARKING
Traveling to Bush Airport soon? You may need to find new parking spot
Marine vet shot at after questioning man for leaving kids in car
Man fatally hit by car at the Galleria Mall
HPD clears person of interest of wrongdoing in deadly Chili's shooting
TOP STORIES
Argument between two groups leaves 2 dead and 2 injured
Biden signs landmark gun measure, says 'lives will be saved'
Bald eagle snatches Yorkie off porch: VIDEO
Norway terror alert raised after deadly mass shooting
Women's clinic closed for abortions after Roe v. Wade was overturned
Body discovered on Galveston beach in 2020 remains a mystery
Congress sends landmark gun violence compromise to Biden
Show More
Supreme Court overturns Roe in landmark case on abortion rights
Companies willing to cover travel costs for those getting an abortion
DA's office prioritizing resources to clear capital murder case pileup
Brian Laundrie confession letter released: 'I ended her life'
A hot weekend ahead of more widespread rain chances next week
More TOP STORIES News