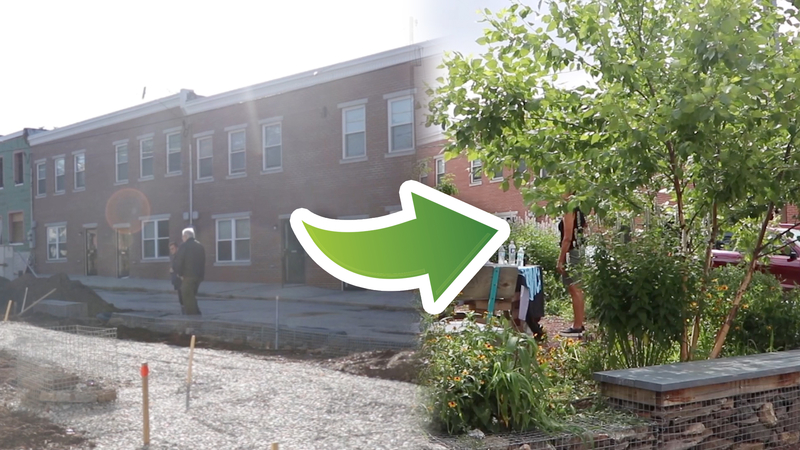 PHILADELPHIA -- "The ground that we're standing on right now, it was a vacant lot," said De'Wayne Drummond. "Now, it's beautified by community members and the youth."

The corner of 38th and Melon Streets is the subject of Thomas Jefferson University's "Park in a Truck" program, which enables community leaders like Drummond to organize and build green gathering spaces on previously empty land.

"We created a table so we wouldn't be on the menu," he said. "We laid the foundation, just for not Mantua but for the city of Philadelphia and abroad."

Drummond is President of the Mantua Civic Association, formed nearly a decade ago to address the lack of resources in his West Philadelphia neighborhood. The group's secretary, Gwen Morris, has lived there for 46 years.

"There are very few businesses, the food desert, no social gathering spaces for adults, those kinds of things," said Morris. "There's a direct link between vacant lots and mental health issues. And that's how we got involved with the whole Park in a Truck project."

The concept is the brainchild of Jefferson's Landscape Architecture program, led by Director Kim Douglas. As the name suggests, they deliver park-building tools to communities using a truck. But that's only the start of this team effort.

Action News was there in October 2019 when construction on the Mantua park had first begun. In the summer of 2021, it is nearly finished.

"The idea is to give communities the opportunity to design and maintain and build their own park," said Douglas. "It's really empowering communities to take open and available lots in Philadelphia, of which we've got 40,000."

The new Mantua park will be particularly useful in that it can drain stormwater, grow plants, provide habitat for wildlife, and host entertainment. Every Saturday this summer, local 8th-grade student park ambassadors will be maintaining the park and organizing activities.

Darby Mann, a recent graduate of Jefferson's Landscape Architecture program, is serving as the Education Coordinator to guide these students.

"It's really important for communities and especially kids to understand that, even in an urban setting, there's still an environment here and it's still precious," said Mann. "Kind of instilling that care and passion that they really can have and impact themselves even at a really small level."

These students are able to use gardening tools and learn communication skills they can use in any profession. Drummond sees that as a sign of good things to come for Mantua.

"The youth is mobilized and I can see that this current community will have a bright future," he said.