Oscars 2020: How Lucasfilm made Robert De Niro 50 years younger in 'The Irishman' 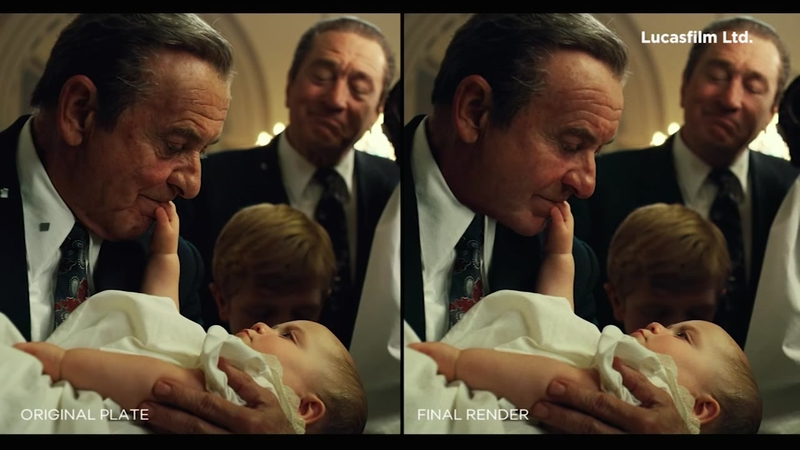 SAN FRANCISCO -- The Oscar-nominated "The Irishman" has been about ten years in the making. The movie, with its famed director Martin Scorsese and legendary actors Robert De Niro, Al Pacino and Joe Pesci, features flashbacks. But instead of younger actors playing younger versions of the characters, the movie features new technology to make De Niro, Pacino and Pesci look decades younger. Those visual effects are now nominated for an Academy Award.

Pablo Helman, who works at Lucasfilm's Industrial Light & Magic, is the visual effects supervisor for film. He says Scorsese and De Niro had been trying to make the movie for 10 years but couldn't until the technology caught up with their vision. Helman and his team developed a special camera set-up and software that includes Artificial Intelligence. Before this technology, motion capture required wearing markers that look like small dots on different parts of the face and body.

"There's this three-camera rig that has the center camera that is the director camera. And then the other two cameras are witness cameras that record data," Helman explains. "Because we don't have markers on their faces, the more data we have, the better the chances of recreating the performance. And so the software takes a look at those three cameras and takes a look at the information that came through the cameras."

As for the future use of the technology, the possibilities are endless.

"There are basically two parts to this technology. One of them is a capture of the digital double, that is contemporary to the actor that is acting. And then the second part is what we call the retargeting--taking that performance and putting it somewhere else. In this specific case, we have put that performance into a younger version of the actor." Helman explains. "It could be that an actor is playing a character and it ends up being a creature or an animal."

"Bob's reaction was 'you know, you gave me 30 more years on my career.' It's really a great, great thing to see".

While the Oscar nomination is for visual effects, Helman says he hopes the technology will allow actors the freedom to do their best work without tech getting in the way.

Lucasfilm Ltd. is owned by Disney, which also owns ABC.