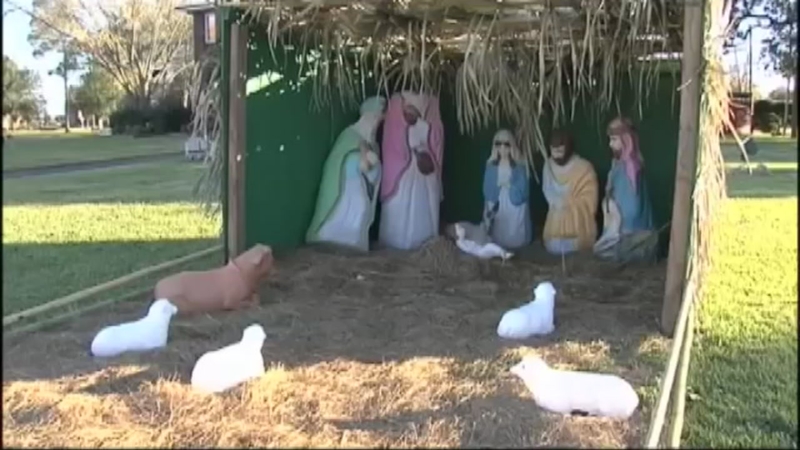 ORANGE, TX (KTRK) -- A battle over a nativity scene in a small town just south of Beaumont has residents fired up. Orange, Texas has displayed the nativity scene for decade, but when an atheist group wanted to display next to it, the city manager had the scene taken down.

Pam Cooper says she's not happy that the nativity scene is no longer on her city hall's front lawn.

"I was so disappointed. My heart is broken. I was angry. I think it's unheard of that we would stop doing a nativity after 30-something years," said Orange, Texas resident Pam Cooper.

It all started after the Orange County atheists wanted to put up a sign at City Hall next to the nativity scene.

Hammers said he called the Orange city manager to ask about putting his sign up. The city manager said no and would not allow it.

The city manager moved the nativity from a public spot to this privately owned park causing a debate amongst the citizens.

It's made Hammers pretty unpopular.

While some residents told us the private park is a nice compromise, many, like Cooper, feel the city manager should have stood his ground and kept the display at City Hall.

"When are we going to stand up?" said Cooper.

It's become such a heated issue that county commissioners are concerned the atheists group may want to put up a sign at the courthouse and that could affect their nativity scene. Commissioners discussed the issue at a meeting on Tuesday but said since displaying the sign wasn't on the agenda, they will take up next year.

Hammers said he plans to bring the issue up then.

Texas officials are now weighing in on the issue. Here's what they had to say:

Governor Greg Abbott today released a statement following the City of Orange's decision to remove the Nativity Scene it had placed at City Hall. The City's decision follows a request by the Orange County Atheists to place a banner in front of City Hall in response to a Nativity Scene being erected.

"As the U.S. Supreme Court has continually held, public acknowledgement of our religious heritage is entirely consistent with the Constitution. The Constitution commands accommodation of religion rather than hostility towards it," said Governor Abbott. "I strongly encourage the City of Orange to stand up to the demands of a select few who wish to see God thrown out of the public square, embrace the season of Christmas and restore the Nativity Scene immediately."

In December of 2014, then Attorney General Abbott offered legal support to Cherokee County in their fight to keep their Nativity Scene following the American Humanist Association's letter requesting it be taken down.

"The Orange County Commissioners Court is under no legal obligation to remove the Nativity scene outside the county courthouse during the Christmas season," said Attorney General Paxton. "The U.S. Supreme Court has consistently held that passive public displays - such as Nativity scenes - acknowledging our nation's religious heritage are constitutional. My office stands ready to provide appropriate legal support to the city and the commissioners court."

I stand behind the City of Orange's initial decision to display the nativity scene of Christ outside of City Hall.

In fact, I encourage the City of Orange to put the nativity scene back on display and not succumb to the those who threaten to silence what many of us hold so dear to our hearts - religious liberty.

Religious liberty is the foundation of our nation. If the City of Orange is worried about litigation, I am happy to make the first donation to their legal defense fund.