Family of 19 among recipients of 'Operation Turkey Dinner' 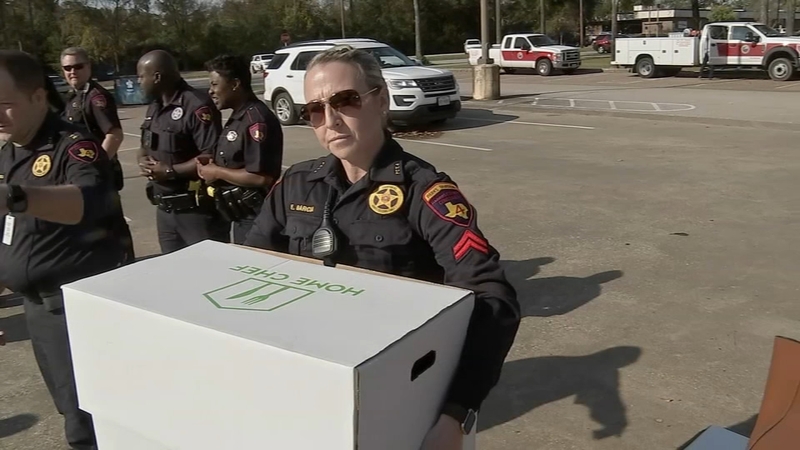 Operation Turkey Dinner serves families, including one with 17 children

HOUSTON, Texas (KTRK) -- Thanksgiving is a holiday of tradition, and for the Harris County Pct. 4 Constable's Office, that includes delivering meals on Thanksgiving eve to families who need some help. It's known, appropriately, as "Operation Turkey Dinner."

An anonymous benefactor has provided money to buy the dinners over the years, while deputies take the meals to the recipients. Each box contains a turkey, dressing, mashed potatoes, bread and bean casserole, as well as a pumpkin pie.

Dozens of boxes were delivered Wednesday. Many of the families were nominated by neighbors or friends as being deserving of assistance. Pct. 4 deputy constables delivered the goods in their patrol cars, fanning out across north Harris County.

Among those on the receiving end was a mother of six daughters, who works full-time.

"This will help make it easier on her," said her daughter, who received the box Wednesday afternoon.

Then there was an even larger family in Humble. The couple has 17 children and all but three of them are adopted. Some of them are even in college.

What was given to them certainly wouldn't feed a big family, but it helps. A Pct. 4 custodian, a working mother, was also presented with the food box. She'll use it for her family Thursday, then go to volunteer, cooking for the homeless.

Constable Mark Herman said each person helped by the donation has their own story to tell about the need in their life. What he sees as a larger picture is that of a community that cares about each other, and extends a helping hand to neighbors who are going through a challenge in their lives.

It's the spirit of giving.