OJ Simpson: A look at how the white Bronco chase unfolded, leading to his arrest 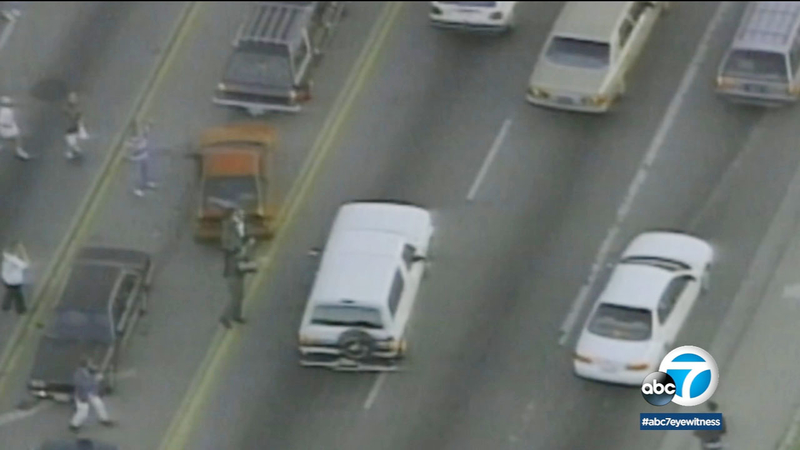 OJ Simpson: The timeline of the chase that led to his arrest

LOS ANGELES -- It's 1:50 in the afternoon at Parker Center in downtown Los Angeles on June 17, 1994. One of the most watched moments in U.S. history is about to begin.

Rumors had been circulating, but Commander Gascon confirms: "He is a wanted murder suspect and we will go find him."

The news spread throughout Southern California and the rest of the world. The beloved football hero, star, legend OJ Simpson was a wanted man, and on the run.

"Today my office filed murder charges against OJ Simpson for the deaths of Nicole Brown Simpson and Ronald Lyle Goldman," Garcetti says. "As of this time, approximately 3 p.m., nobody knows where he is."

It was a story that was getting more riveting by the minute. People were tuning in across the country. Where's OJ?

At 5 p.m., longtime OJ friend Robert Kardashian reads a letter written by Simpson. "I loved her. Always have and always will. If we had a problem it's because I loved her too much."

Simpson ends his letter with the phrase "I've had a great life."

Police trace his location to the 5 freeway in Santa Ana. He's in a white Ford Bronco. His best friend Al Cowlings is driving. The CHP finds him in just minutes.

And so do we, from the air and the ground. It was real life playing out like the ultimate television drama.

The star was adored for decades, but was now living a nightmarish fall from grace. An estimated 95 million people watched. Domino's pizza reported record sales because people couldn't pull themselves away.

"911 what are you reporting?" says an operator on the other side of the Al Cowlings phone call. "This is AC, I have OJ in the car," he says. "He's still alive but he has a gun to his head. He just wants to see his mother. Let me get him to his house."

As Al Cowlings tried to get OJ home, there was gridlock on overpasses as people desperately tried to get a glimpse of the white Bronco. And when they exit the 405 freeway at Sunset Boulevard, the crowds were waiting.

At 7:57 p.m., the white Bronco arrives at Simpson's Brentwood home. As police negotiate to get him out, a gathering crowd adds to the chaos. People trying to show their support for Simpson as a standoff is taking place just about 500 yards in front of them.

Finally, at 8:47 p.m., Simpson surrenders and is seen being driven away, ending one of the most bizarre moments in television history.