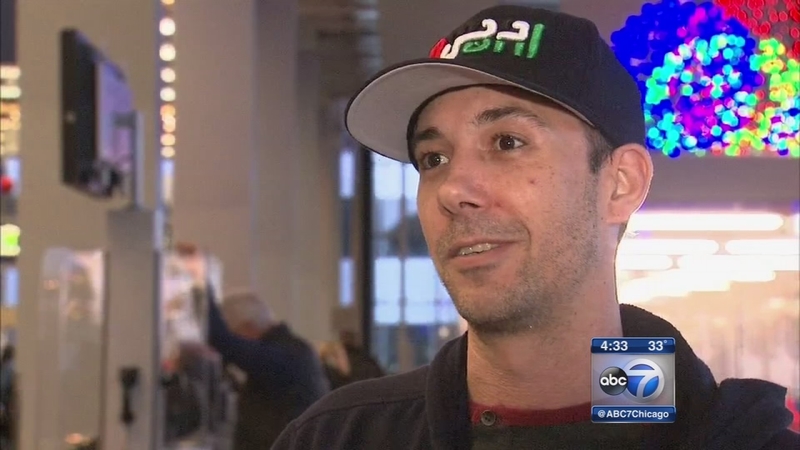 CHICAGO, IL -- A man who was stranded for more than 50 hours at O'Hare International Airport used the delay to propose to his girlfriend in Arizona.

Danny Roderique had plans to fly home to Phoenix this weekend to ask his girlfriend to marry him, but bad weather meant his flight out of O'Hare was canceled again and again.

So on Sunday, he decided to take a picture of the diamond ring and asked her to marry him over the phone. She said yes.

"I'm just, holiday travel, I mean, that's all I can say, and the weather," Roderique said.

He's not the only one stranded in Chicago. More than 1,600 flights were canceled Monday at Midway and O'Hare airports.

"We started this morning at 3 a.m. from Harrisburg, PA. Trying to see family in Wichita for the New Year. Hi Grandma!" said Matt Skillen.

Grandma will have to wait. This family's flight to Kansas was one of nearly 1,360 canceled out of O'Hare. They will be in Chicago at least until Wednesday. It was the same deal at Midway.

"I'm going to go back to my house and call my employer and see if they can help me to find other options but otherwise, if there are no other options, I am here until Thursday morning," said Vidal McNeal, whose flight was canceled.

Related topics:
travelillinoisbuzzworthyair travelmarriageu.s. & worldpassenger
Copyright © 2021 WLS-TV. All Rights Reserved.
RELATED
Winter weather strands travelers in Houston
TOP STORIES
Arrest made in case of Alvin abduction, sexual assault of a minor
20-year-old shot to death during break-in of Conroe home, police say
Man accused of dismembering mom's body after murder appears in court
Houston Astros on pace for record beer year
Astros Game 6 guide: Closures around Minute Maid Park back on tonight
The University of St. Thomas offers low-cost counseling services
JJ Watt on Texans: 'It hurts me to see where' fan base is now
Show More
More truck drivers needed to assist with US' supply chain shortage
Don't get stuck in these traffic closures this weekend
Warrant: Baldwin didn't know weapon contained live round
Prop guns: What they are and how they can kill
4 teens accused of luring victim to his death in SE Houston
More TOP STORIES News