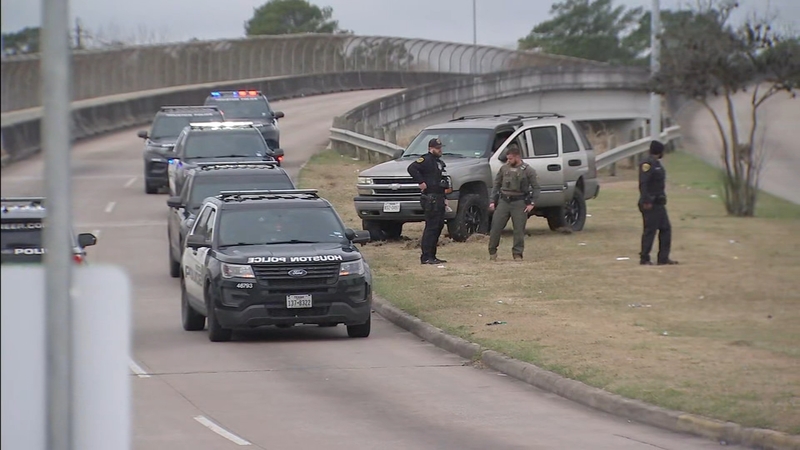 HOUSTON, Texas (KTRK) -- A car chase began after a carjacking suspect fled in northeast Houston on Sunday morning, according to police.

The 19-year-old told police he left his car running with the door open while he took out the trash. When he returned, the suspect was in the driver's seat, officials say.

In an attempt to stop the suspect, the victim got in the back seat when the 30-year-old exposed his weapon. The 19-year-old got out of his car unharmed, according to police.

Officers spotted the stolen car at about 8:30 a.m. at a restaurant on 59 and West Little York.

The suspect pursued a short car chase that ended in the 7800 block of Tidwell after he crashed and ran.

An HPD K-9 and other officers followed on foot. Police said the suspect opened fire and was shot by three officers. The 30-year-old was transported to a nearby hospital in critical condition. Houston Police said one officer suffered a minor injury. The other two officers involved in the shooting were not injured.


The three HPD officers who discharged their weapons are P. Foster of the Tactical Operations Division, and D. Jenkins and C. Welch of the Northeast Patrol Division. Foster was sworn in as an officer in April of 2008. Welch was sworn in back in May of 2017 and Jenkins was in May of 2019. Per HPD policy, the three officers are now on administrative leave.

The suspect, who has not been identified, is facing two counts of aggravated assault against a public servant and one count of aggravated robbery.

"I understand that I think this is the ninth officer-involved shooting in our city," Finner said to a group of reporters. "As I always say, continue to pray for our officers. This suspect has a family and I always say pray for the family. Just, at some moment, I hope that this violence, senseless violence and people firing upon officers, I hope it ends."

Joe Lopez, who lives in the area where the chase ended, said he heard the gunshots and told his family to take cover.


We ran, we ran for cover in the hallway, and he unloaded a gun," Lopez said. "I'd say a whole round of clips, so we didn't know what was going on."

HPD commanders & PIO are en route to an officer-involved shooting at North Wayside Drive at Tidwell Rd in NE Houston.

Prelim info is a carjacking suspect was shot by officers. Suspect transported to a hospital. No officers hurt. Further info will come from the scene.#hounews pic.twitter.com/OeiUnGhQJI