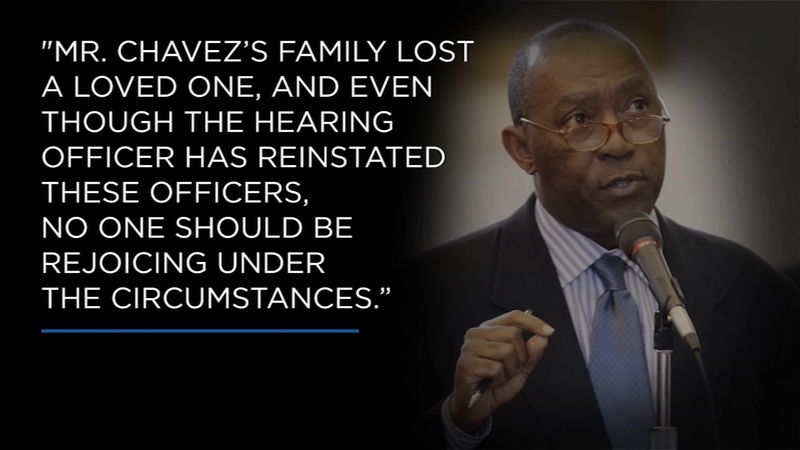 HOUSTON, Texas (KTRK) -- Three Houston police officers and a sergeant, who have been fighting to get their jobs back after shooting and killing a man who was suicidal back in 2020, have been reinstated.

The officers and sergeant made their case before an arbitrator last week.

In April 2020, police responded to a call in east Houston about a man, identified as Nicholas Chavez, in distress who was armed and running into traffic in the 800 block of Gazin Street.

Body camera video showed Chavez was on the ground bleeding from a gunshot wound. Before officers started firing the 21 shots they discharged, Chavez apparently reached for a taser.

Nicholas Chavez's father, Joaquin Chavez, said, "This adds to the trauma my family has been through over the past two years. We didn't know about the decision or the HPD news conference announcing it, so this leaves a bad taste in our mouths. It was a shock for all of us, and we denounced the decision."

Former HPD Chief Art Acevedo fired the officers and sergeant for using unreasonable force. Back then, Acevedo said "Although Nicholas Chavez had picked up the stun gun, the officers had plenty of time to back up and take cover. Nicholas Chavez was already injured, having been hit by gunfire earlier in his standoff with police. Officers had also fired bean bag rounds and stun guns at him before he was killed."

Those officers were identified as:

Officer Patrick Rubio, who had been with the department since May 2018.

Officer Luis Alvarado, with the department since March 2019.

Officer Omar Tapia, with the department since March 2019.

Sgt. Benjamin LeBlanc, with the department since October 2008.

According to our partners at the Houston Chronicle, Nicholas Chavez's family said he was mentally ill and in 2020, they filed a $100 million wrongful death lawsuit.

A judge dismissed it, and a grand jury declined to charge the officers and sergeant.

On Monday at about 3 p.m., HPD chief Troy Finner addressed the reinstatement.

"Although I was not the final decision maker when officers were indefinitely suspended," Finner said, "I believe there was evidence of policy violations."

"I ask that everybody does as we always do, as Houstonians, we stand together in difficult times," Finner said.

Finner ended the press conference asking the public to "pray for the Chavez family" and everyone involved.

"I reviewed the video shortly after the shooting of Mr. Chavez and was disturbed by what I saw. The city dismissed the officers, but the independent hearing officer has reinstated them. It is important that before any consideration is given to placing these officers back on the street, they be retrained and fully understand the policies of this city. Mr. Chavez's family lost a loved one, and even though the hearing officer has reinstated these officers, no one should be rejoicing under the circumstances."
Report a correction or typo
Related topics:
houstondeadly shootinghouston police departmentfatal shootingofficer involved shootingshootingman killedman shothouston politics
Copyright © 2022 KTRK-TV. All Rights Reserved.
OFFICER INVOLVED SHOOTING
Autopsy proves man was no threat to officer who shot him, family says
Off-duty UH officer opens fire at 2 ATM robbery suspects
Catalytic converter theft suspect shot and killed by Sugar Land police
Officer's vest, flashlight saved own life in shootout, HPD chief says
TOP STORIES
Weather Alert Day: Storms move thru SE Texas bringing much needed rain
Missing Alvin ISD employee who 'had deep secrets' found safe
Hidalgo to release data on gun-related homicides ahead of NRA meeting
Ready to cast your ballot? 50 primary races headed to runoffs
Heard rests case at libel trial without calling Depp
Travis Scott faces new lawsuit, but it's unrelated to Astroworld Fest
Mom hears late son's heartbeat in 14-year-old boy for 1st time
Show More
Endangered sea turtle nest found on Galveston Island State Park
Young Thug rap lyrics used as alleged evidence in RICO indictment
Man found shot to death near homeless camp, HPD says
Baylor to relocate statue of slave-owning former university president
California parents could soon sue for social media addiction
More TOP STORIES News