Pecan Lakes homeowner finds herself in knight fight with HOA

A Pecan Grove homeowner finds herself in the midst of a knight fight with the homeowner's association.

NAVASOTA, TX (KTRK) -- Though the Castle Doctrine is law in Texas, one homeowner's association says a knight should not be standing guard outside homes.

"Your home is your castle!" said Ammi Miller. She owns the knight and says its been on her front porch for the last eight months. Just two weeks ago she got a letter from the Pecan Lakes Homeowner's Association telling her it was in violation of deed restrictions and must be removed.

Out of frustration, she posted the letter on the neighborhood facebook page. Conversations grew and Miller named it and created the "Save Sir Juan Rodriguez Dominguez Ramirez Perez Smith" page. "I think it's hilarious. I think it's totally hilarious," said Miller. In order to save her from any consequences from the HOA, she's taking up offers from neighbors to post the knight outside their homes as well. 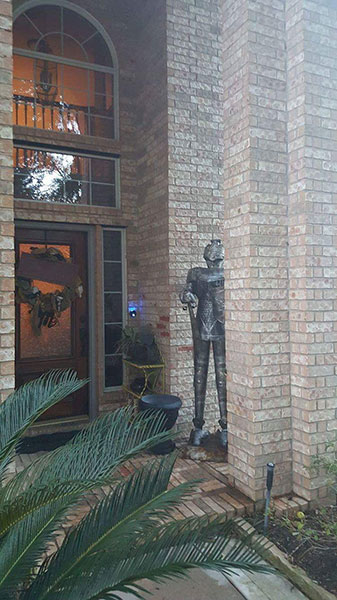 "I know we're being defiant. Defiant adults," said Michelle Hogan. She volunteered to take the knight and has dressed it up now too. Earlier she had it in sunglasses with a Hawaiian lei around his neck and what looked to be drink in his hand. "We'll just make him the eyesore they thought him to be!" said Hogan.

Other homeowners are lining up to take this knight next. They hope to keep moving him every few days so the HOA can't go after any single homeowner.

The Pecan Lakes HOA board refused to answer specific questions, but issued a written statement:

It's not clear what any consequences might be for keeping the knight on display.