Oil workers on strike in Houston and across U.S. 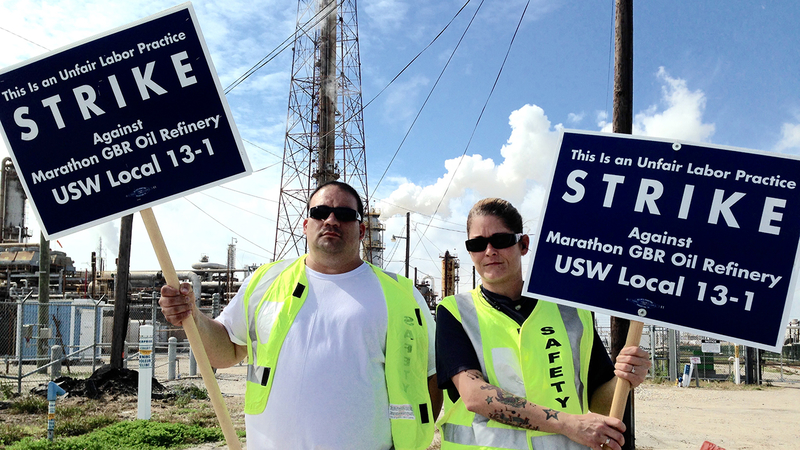 HOUSTON (KTRK) -- Oil workers from coast to coast are on strike. They started to walk off the job around midnight when their union failed to reach a deal with the energy industry. It's not clear how many workers are on strike.

The contract in dispute covers about 30,000 workers at refineries, pipelines, oil terminals, and petrochemical plants across the country, including about 5,000 workers here in Houston. A representative for the United Steelworkers Association, which is the union for the workers, say there are work stoppage at these facilities in the Houston area: LyondellBasell in Houston, TX; Marathon Galveston Bay Refinery in Texas City, TX; Marathon Houston Green Cogeneration facility, Texas City, TX; Shell Deer Park Refinery, Deer Park, TX; and Shell Deer Park Chemical Plant, Deer Park, TX.

At the LyondellBasell plant in southeast Houston, workers started to protest around 6am. Last night, more than a dozen workers walked off the job shortly after midnight.

"It's about health, safety. It's about issues that confront our workers every day," said Director of the United Steelworkers, Ruben Garza.

Garza explains why the national union called a strike at midnight at specific refineries, many of them in here in Southeast Texas.

"We have a lot of health and safety issues we have overtime issues, fatigue standards that the companies manipulate," he said.

Shell is representing the energy industry in labor talks with the United Steelworkers Association. Shell hasn't commented on what caused talks to break down. The USW sent a message to its members calling the latest offer from oil companies "insulting."

USW released this statement this afternoon:

"Shell and USW have agreed to extend the existing labor contract for at least the next 24 hours while negotiations continue to reach a mutually satisfactory agreement. However, Shell has learned that the USW has given notice to its members at the Shell Deer Park site to begin a strike at 12:01 on February 1, 2015. That site has activated its strike contingency plan to continue operations in the normal course of business. Remaining Shell and Motiva sites involved in the contract negotiations (Norco, Convent and Martinez) have received rolling 24 hour extension agreements. We remain committed to resolving our differences with USW at the negotiating table to reach a mutually satisfactory agreement."

In an earlier statement, USA International President Leo W. Gerard said, "Shell refused to provide us with a counter-offer and left the bargaining table. We had no choice but to give notice of a work stoppage."

USW International Vice President Gary Beevers, who heads the union's National Oil Bargaining Program, said in the same statement, "This work stoppage is about onerous overtime; unsafe staffing levels; dangerous conditions the industry continues to ignore; the daily occurrences of fires, emissions, leaks and explosions that threaten local communities without the industry doing much about it; the industry's refusal to make opportunities for workers in the trade crafts; the flagrant contracting out that impacts health and safety on the job; and the erosion of our workplace, where qualified and experienced union workers are replaced by contractors when they leave or retire."
Related topics:
houstonstrikeoilu.s. & world
Copyright © 2021 KTRK-TV. All Rights Reserved.
More Videos
From CNN Newsource affiliates
TOP STORIES