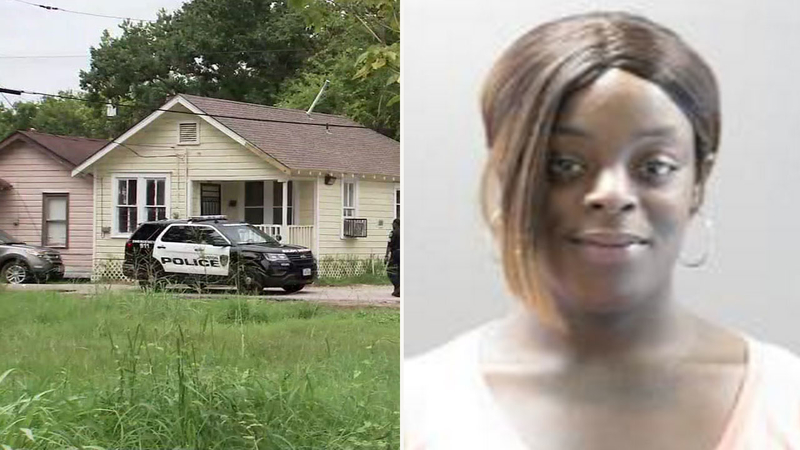 HOUSTON (KTRK) -- A mother admitted to drowning two of her children in a bathtub in their Third Ward home and hiding their bodies underneath the home next door, police say.
EMBED More News Videos

A mother is awaiting her first court appearance for accusations of killing her kids.

Authorities have identified the woman as 30-year-old Sheborah Thomas. She has been charged with capital murder and is expected in court today.


At the scene, Kita Smith identified herself as the children's aunt and said the victims are Kayana Thomas, 5, and O'Raylan Thomas, 7.

"How am I going to tell my brother about his kids?" Smith cried. She said the children's father is incarcerated and did not yet know what had happened.

"Why would anyone do this? It's just senseless. It's just a phone call away! I would have come and got these kids!" Smith said, adding that she had taken care of the children for their mother in the past.

Houston Police Department spokesperson Kese Smith said one of the Thomas' friends spotted her throwing things out of her house on Tierwester near Rosalie into an adjacent field on Sunday morning.

Authorities say Thomas told the man she had to move today and asked him to help her move. As they packed her belongings, he asked about her children, wanting to know where they were. She "matter-of-factly" said she killed them, Kese Smith explained.

The man initially thought she was joking and, after he was done helping her, asked again about her children. Kese Smith said Thomas repeated that she had killed them.

The man then drove Thomas to a nearby police station.

"He didn't want her to know where they were going, so he parked a block away and walked to the station where he flagged down an officer outside," Kese Smith explained.

Thomas was then taking into custody. She was not at the scene, but was able to tell officers were the bodies were hidden.

Investigators then located the bodies of the two children underneath the house next door. She allegedly drowned them in the bathtub on Friday.

Thomas also has a 12-year-old son, but he was not home at the home and safe with his father.

Authorities have confirmed to Eyewitness News that Child Protective Services had visited the home in the past, although they could not elaborate on the nature or date of the visit. The Office of Child Safety is reviewing the case, said spokesperson Tejal Patel.

Thomas has no history of mental illness.

Kita Smith has set up a GoFundMe campaign to fund funeral services for the two children killed.

Keep checking back on this page to get real-time updates as this story unfolds. To get alerts for breaking news, download the abc13 news app for iPhone or Android. You can also get breaking news alerts sent to you by email.
Related topics:
greater third wardhoustondrowninghouston police departmentchild killeddouble murder
Copyright © 2021 KTRK-TV. All Rights Reserved.
More Videos
From CNN Newsource affiliates
TOP STORIES