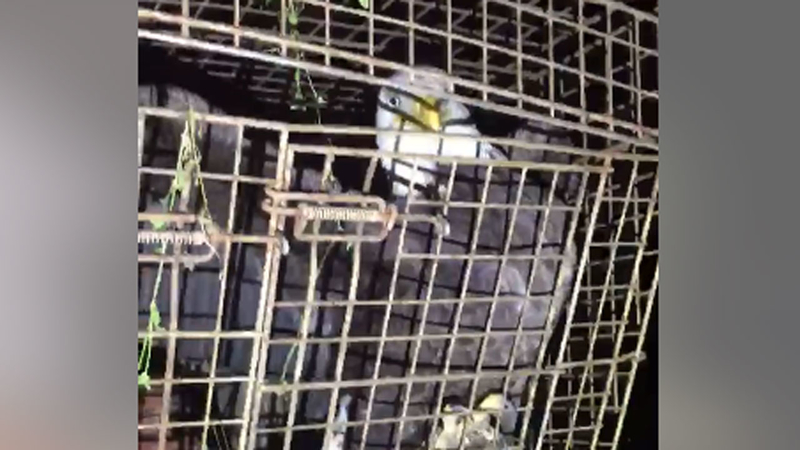 SARGENT, TX (KTRK) -- We've got some exclusive new video of a bald eagle being rescued overnight.

A retiree was just tending to his duties on a ranch in Sargent when he got the chance to rescue the majestic bird.

Harvey Howard spotted the eagle sitting out in a pasture as he was checking the water troughs for the cattle Wednesday evening.

After a while, Harvey glimpsed something glistening from the bird's wing. The eagle was stuck in place, unable to fly after it somehow became tangled in some fishing wire.

Harvey's wife, Liz, says he watched the bird carefully, and was soon face to face with the struggling eagle.

The fishing wire was wrapped around the bird's wing and leg, Liz tells Eyewitness News, preventing it from fleeing the close encounter with mankind.

That is when Harvey grabbed a glove, and set out to help rescue the bird.

"He only had one glove," Liz said. "He didn't think it would bite him, but it did as he put the eagle in a feed sack."

Harvey rushed the bird to his house, and excitedly told Liz what happened. Together, the couple transferred the eagle to a large cage.

After calls to the sheriff, the game warden, "everyone under the sun," a rescue group came to help the bewildered bird.

They found a fishing hook deep in the bird's wing, keeping the wire wrapped around its body.

The good news is the hook did not pierce the bird's muscles, and it was not injured by the snare.

The eagle's caregivers say it may have a nest in the area, so the hope is to release the bird back into the same field soon.