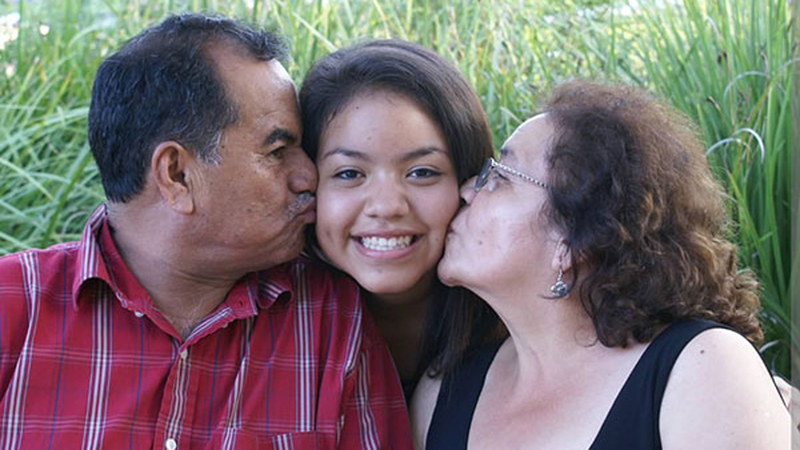 HOUSTON (KTRK) -- There is a growing memorial at the intersection where a teen was killed returning from prom with her date. A relative said, "She was beautiful and touched everybody."

Raindrops fell on roses, loving words ran down a page and candles flickered under umbrellas. Another relative stood in front of the crowd and said, "She was only 18 years young, a beautiful bright light and big-hearted girl. Our family is broken in pieces right now."

The sea of umbrellas may deflect some of the falling rain, but nothing can stop the stream of tears. Jocelynn Valero's cousin Yulissa Nava said, "She was always smiling. On the quiet side, but even with that she showed who she was and had a great personality. We're all going to miss her."

The family said the 18-year-old YES Prep North Central student had even been nominated to be prom queen. Her sister Analisa Valero said, "She had a bright future ahead of her. This isn't fair. I'm angry. I wanted to see her get married, I wanted to see her have kids."

Police say the suspected drunk driver who struck her and her date ran a red light on the North Freeway feeder road near Tidwell as officers chased him. She died at the scene and her date was taken to the hospital.

Analisa Valero added, "This has happened time and time again, and it leaves broken family after broken family. It's not fair."

While nothing can wash away her memory, her friends and family say a picture isn't what they should be left with. Valero said, "She was an amazing person who always had a smile on her face, she was happy. She didn't have anything negative to say about anyone. She didn't deserve this."

The driver of the truck, 27-year-old Edin Palacios-Rodas, is now facing charges of murder and evading arrest.