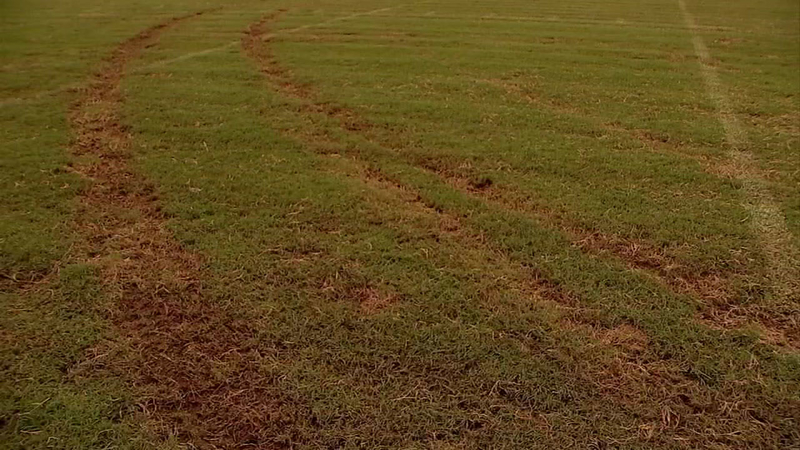 DANBURY, TX (KTRK) -- Vandals have left a local high school football field trashed. They caused so much damage on the field of Danbury High School, they had to change plans for an upcoming game.

"It's something that's in the heart of Danberry and that's been here for the community and its been destroyed," said School Superintendent Greg Anderson.

Now if there's one thing folks here in Danbury don't play about, it's their football under the Friday night lights.

"They love and cherish their football field," said Eileen Linnett.

Danbury High is a small school -- only about 750 students -- so they work with what they have.

"We don't have a lot of money to work with because we are such a small school," added Linnett.

"The school just got the ball field to where it's nice and green, and they take pride in their ball fields and so do the students," added Police Chief Derek Dyson.

But all the hard work was ruined over the weekend by vandals.

"We do believe it could be possibly two vehicles," Dyson said.

Two big trucks took to the field doing donuts and spinning around, tearing up the ground and ripping up chunks of grass.

"Shame on you," said Linnett.

Now homecoming next week is in jeopardy.

"The kids are in uproar on whether or not if we're going to get to have our homecoming or not," said Linnett.

"We've had to take the game for Thursday night and move it to Palacios," added Anderson.

The field looked better Monday afternoon, thanks to volunteers.

"They've had a crew out here working several hours today and they've done a lot of work it's already improved," said Linnett.

Now police are on the culprits' tracks.

"We took pictures and did measurements and took some tire impressions," added Chief Dyson.