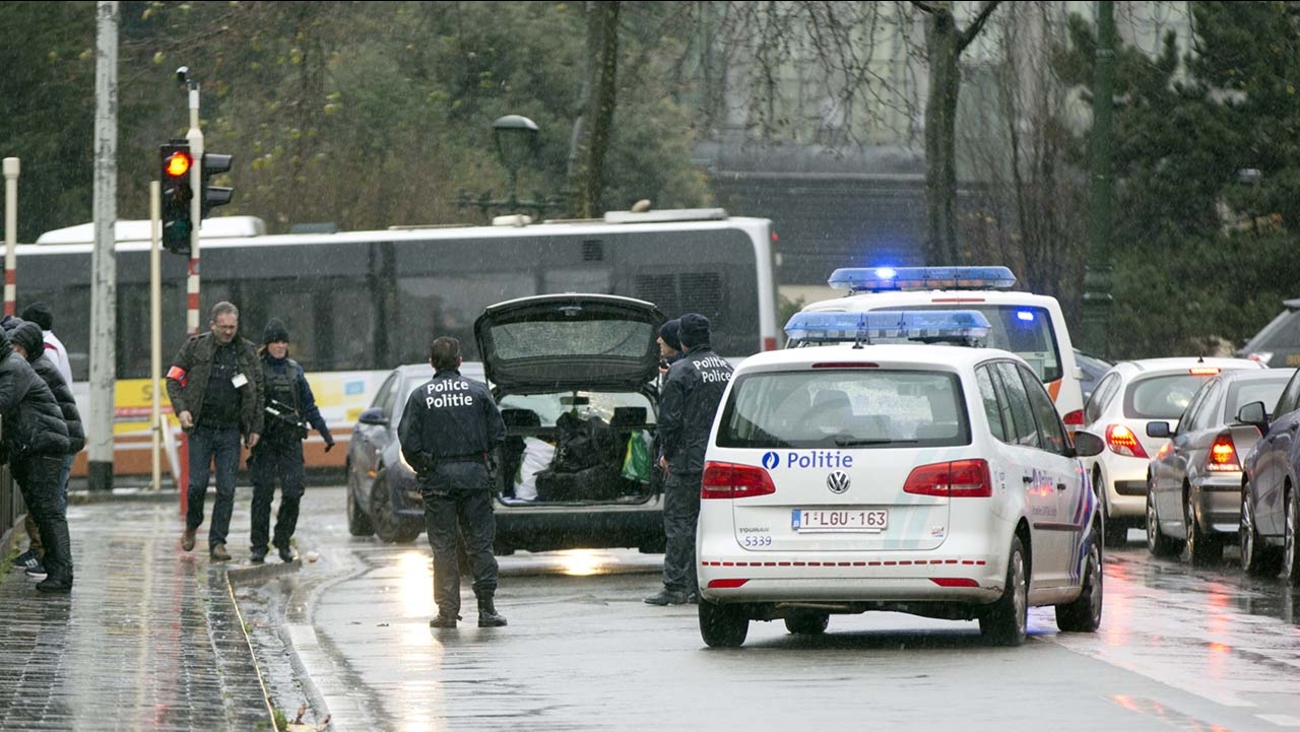 BRUSSELS, Belgium -- Belgium's capital entered a security lockdown Saturday as the government warned of a threat of a repeat of Paris-style attacks, with subways in Brussels closed and heavily armed police and soldiers deployed. At least one suspect from the deadly Paris attacks is at large, and was last seen crossing into Belgium.

Prime Minister Charles Michel said the decision to raise the threat level was taken "based on quite precise information about the risk of an attack like the one that happened in Paris ... where several individuals with arms and explosives launch actions, perhaps even in several places at the same time."

Authorities across Europe, the Mideast and in Washington are trying to determine how a network of primarily French and Belgian attackers with links to Islamic extremists in Syria plotted and carried out the deadliest violence in France in decades - and how many may still be on the run.

A new potential link emerged Saturday in Turkey, where authorities said they detained a 26-year-old Belgian suspected of connections to Islamic extremists - and possibly to the Paris attacks.

At least one Paris attacker, Salah Abdeslam, crossed into Belgium the morning after the attacks. A Paris police official and the Paris prosecutor's office said Saturday they had no firm information on Abdeslam's whereabouts, including whether he was in the Brussels area.

Heavily armed police and soldiers patrolled Saturday morning at key intersections of the Belgian capital, a city of more than 1 million that is home to the headquarters of the European Union, the NATO alliance and offices of many multinational corporations.

Residents were recommended to avoid gatherings, train stations, airports and commercial districts. Service was halted on the Brussels Metro, as well as on streetcar lines that run underground.

The prime minister, speaking at a news conference after the emergency government meeting, said, "We urge the public not to give in to panic, to stay calm. We have taken the measures that are necessary."

He said that the government's crisis cell will meet again on Sunday afternoon to reassess the threat.

The state-run Anadolu Agency said Saturday that the two Syrians and the Belgian national - identified as Ahmet D. - were detained near the Turkish coastal city of Antalya. The private Dogan news agency identified the Belgian as Ahmet Dahmani and said he is suspected of having explored areas in Paris that were targeted in the attacks.

Concerns about Europe's porous borders prompted interior and justice ministers meeting in Brussels on Friday to promise tightened border controls to make it easier to track the movements of jihadis with European passports traveling to and from warzones in Syria.

Prosecutors said Friday that they had determined through fingerprint checks that two of the seven attackers who died in the bloodshed Nov. 13 had entered Europe through Greece, an entry point for many of the hundreds of thousands of migrants seeking asylum in Europe.

The five other attackers who died had links to France and Belgium. One of the seven dead has not been identified, while a manhunt is underway for one suspect who escaped, 26-year-old Abdeslam. French police stopped Abdeslam the morning after Friday's attacks at the Belgian border but then let him go. His brother Brahim blew himself up in the Paris attacks.

The suspected ringleader, Abdelhamid Abaaoud, was killed in a raid Wednesday on an apartment in the Paris suburb of Saint-Denis.

Marking a week since the carnage, some Parisians lit candles and paid tribute Friday night to the victims with silent reflection. Others decided that enjoying themselves was the best way to defy the extremists. They sang and danced on Place de la Republique, in the heart of a trendy neighborhood where scores of people were killed, most of them in the attack on the Bataclan concert hall.

France's Parliament has extended a state of emergency for three months, expanding police powers to carry out arrests and searches and allowing authorities to forbid the movement of persons and vehicles at specific times and places.