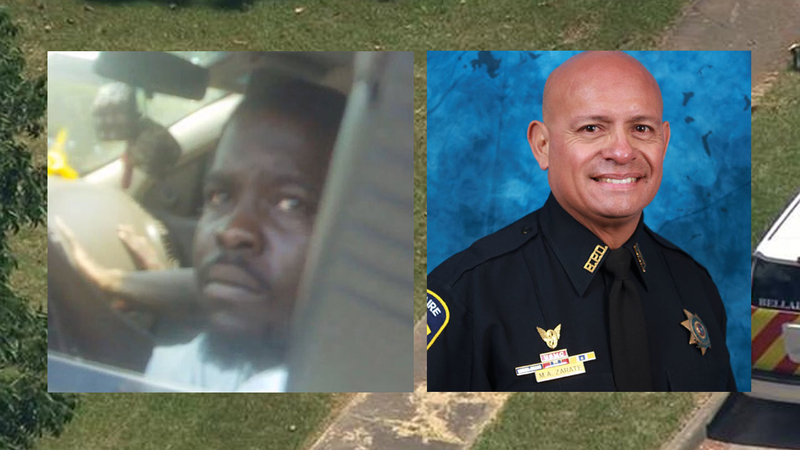 HOUSTON (KTRK) -- A Bellaire police officer was killed Tuesday afternoon in a motorcycle accident in southwest Houston and investigators are looking for who they're calling a "person of interest."

Authorities released a photo Tuesday night of a man they want to talk to about the chase Officer Anthony Marco Zarate was involved in when he crashed. They're asking the public for help in identifying him. We've learned the photo was taken from Zarate's department-issued body camera.

According to Houston police, 52-year-old Zarate was flagged down in the Meyerland Plaza Target parking lot and alerted to two shoplifting suspects. He conducted a traffic stop on a vehicle and they took off. Zarate chased the car. On Ferris Street near Beechnut, Zarate lost control of his motorcycle and collided with a landscaper's trailer. When emergency officials arrived, he was unconscious and not breathing. Paramedics administered CPR to no avail.

The men and women of HPD send their condolences to the @bellairepd for their loss. Our thoughts and prayers are with you.

The officer was pronounced dead at Memorial Hermann Hospital.

Zarate, a seven-year veteran of the force, is survived by his wife and three daughters, a 25-year-old and 11-year-old twins. He sat on the board of the Bellaire Police Officers' Association. In 2010, Zarate was nominated as officer of the year.

The 100 Club of Houston also announced that it will provide assistance for the family of Officer Zarate. The non-profit organization will give his wife a $20,000 check to help with financial needs, according to a release. The organization says the average gift to a dependent family is approximately $300,000. To contribute to the fund, visit The100Club.org.

Prayers for the @bellairepd as they have lost one of their own in the line of duty. RIP brother we have the next shift.