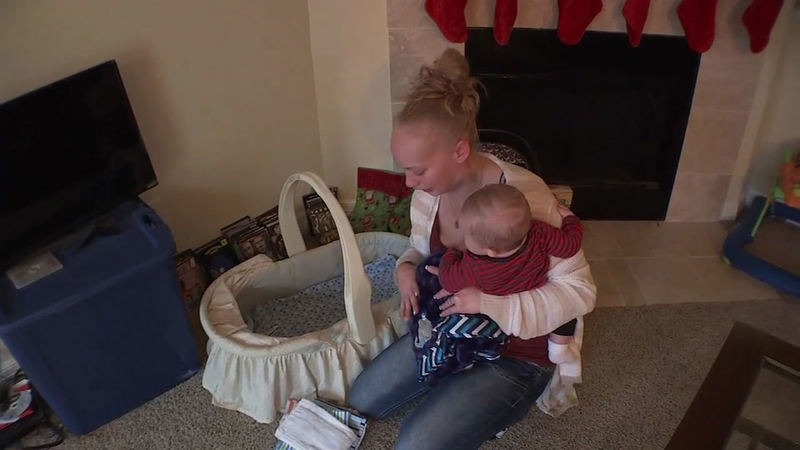 BAYTOWN, TX (KTRK) -- It's January 6, and the Cunningham's still have all their Christmas stuff up.

"Christmas is happy times. If it were bare like it was before, I think I would cry every night," said Chelsey Cunningham.

Chelsey says the walls were bare because they're still waiting on all of their things from the moving company.

The Cunningham's moved from Virginia to Baytown. The move started in October. Chelsey said she agreed to pay a total of $1,500 to a Florida-based moving company. She said the payments were broken up with $1,000 due before the move and $500 on delivery.

Chelsey says the company kept adding on fees. She had to save up but eventually got enough money. So far she says she's given the company $1,800.

Now she says the company is telling her to pay another $935, plus fees or all of her items could be auctioned off.

She said she's disputing the bill. After three months, she's still waiting on their things.

In the meantime, the family has tried to make do with what they have. Chelsey's seven-year-old daughter is sleeping on an air mattress and here three-year-old is sleeping on a plastic cot with no mattress. It's been that way now for nearly three months.

Her daughters' closet is barely equipped for the cold.

"Everything warm that we have is in storage," she said.

We contacted the moving company. They told us Chelsey added items to her move and that changed the cost. Chelsey disagrees and the dispute continues.

According to the Better Business Bureau the company in question has 16 complaints and has only been in business for one year so it's not yet rated with the agency.

The BBB local president said the best thing you can do when moving is do your research.

"Getting the right one is not hard. It takes your due diligence and lots of research, reviews, the BBB report, even, what I would call some renegade sites that get on there and say here is our experience," said Dan Parsons, President of the Houston area BBB.

A GoFundMe account has been created to help the family replace some stuff.
Related topics:
baytown out and aboutmoving
Copyright © 2021 KTRK-TV. All Rights Reserved.
TOP STORIES
Boston-bound jet crashes on takeoff west of Houston with 21 on board
Houston executive 1 of 21 on board jet when it crashed in field
How residents in this Harris County neighborhood became numb to crime
Loved ones remember mom of 3 killed during home invasion
Alvin Community College offers way to tap into oil and gas
Friendswood gas fire put out after more than 5 hours since eruption
Aviation weighs in on what might have gone wrong in plane crash
Show More
Jan. 6 panel votes to hold Steve Bannon in contempt
Big warm up ahead but another cool front in the forecast
Astros vs. Red Sox: Houston ties the series after 9-2 win over Boston
Unsolved: A Life Never Lived
Alvin Community College gives inmates way to earn a second chance
More TOP STORIES News