Panel backs aspirin for heart health in only certain adults 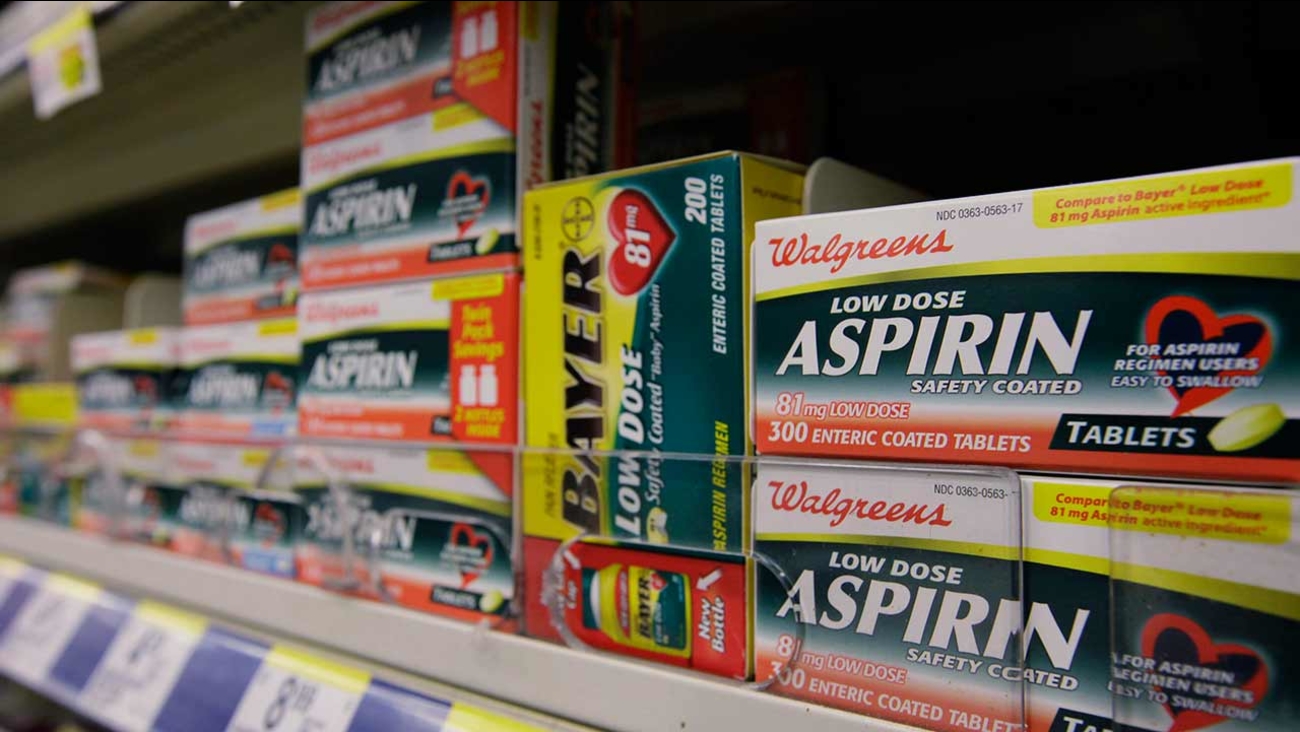 Packages of aspirin fill the shelves of a drugstore. (AP Photo/M. Spencer Green)

AP
WASHINGTON -- A government task force says a daily low-dose aspirin could help certain people in their 50s and 60s prevent a first heart attack or stroke - and they might get some protection against colon cancer at the same time.

The U.S. Preventive Services Task Force issued draft guidelines Monday recommending aspirin only if people meet a strict list of criteria - including a high risk of heart disease and a low risk of bleeding side effects.

The guidelines said the recommendation is strongest for 50-somethings, but that doctors should decide aspirin therapy on a case-by-case basis for people in their 60s, who can expect a smaller benefit.

Potential candidates should have at least a 10 percent risk of a heart attack or stroke over the next decade, have a life expectancy of at least 10 years and be willing to take daily aspirin that long, and not have other health conditions that cause bleeding, the guidelines said. That's because prolonged aspirin use can trigger serious bleeding, in the gastrointestinal tract or brain.

Aspirin therapy has long been recommended for heart attack survivors, but who should try it for what's called primary prevention - protection of a first heart attack or stroke - is less clear. And while studies suggest years of daily aspirin use may lower the risk of colon cancer, no major health organizations recommend taking it solely for that reason.

Neither do the task force guidelines - the aspirin decision is supposed to be made on the basis of patients' heart health - but it concluded the cancer information would be useful as doctors and patients discuss the choice.

"If you're a person trying to decide whether to take aspirin, you'd want to be aware of all the potential benefits and the potential harms," said Dr. Douglas Owens, a Stanford University professor and task force member.

The task force said there's not enough evidence to assess aspirin therapy for those under 50 or over 69. The updated guidelines back aspirin for a narrower age range than the last time the task force weighed the question, but for the first time adds information about the possible cancer benefit if people use aspirin long enough.

The guidelines are in line with American Heart Association recommendations, said Dr. Elliott Antman, a Harvard University professor and former AHA president who welcomed them.

In contrast, the Food and Drug Administration last year ruled that there wasn't enough evidence to support marketing aspirin for prevention of first heart attacks.

The task force guidelines are open for public comment through Oct. 12 at www.preventiveservicestaskforce.org.