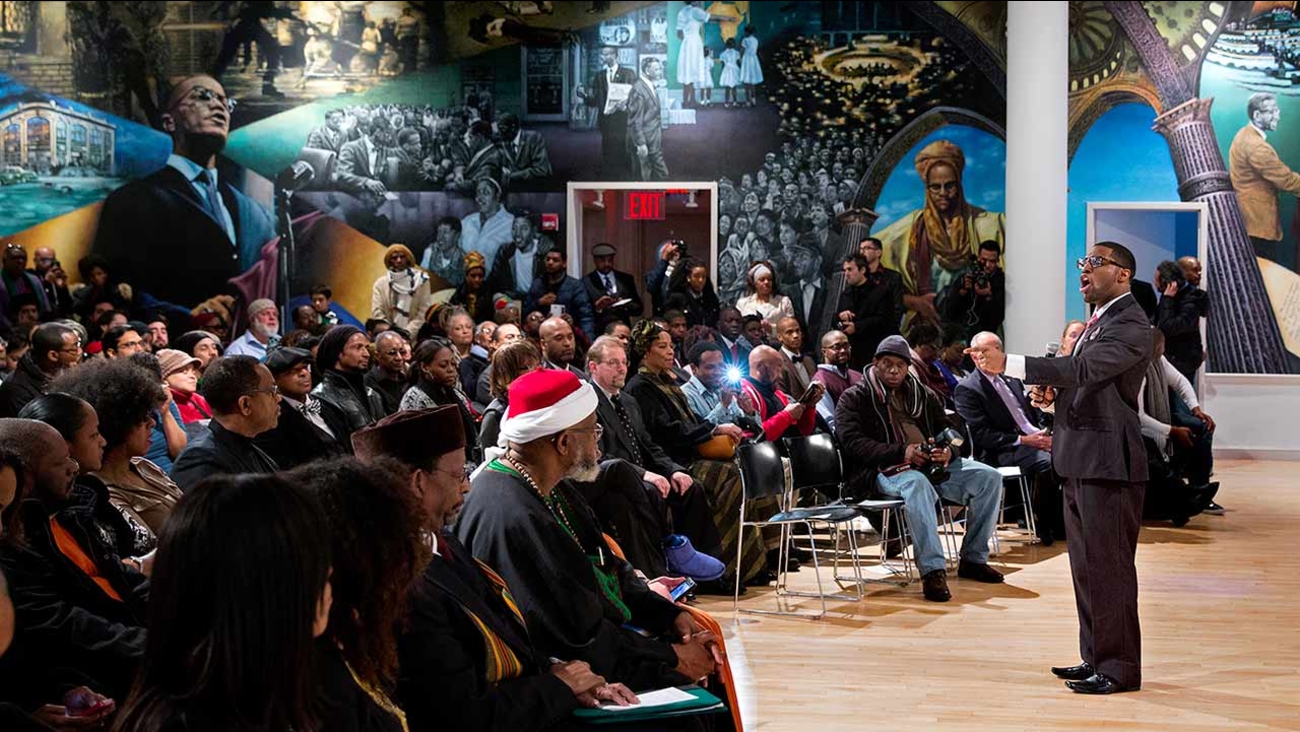 A mural depicting the lives of Malcolm X and his family is the backdrop for artist Jamel Hudson as he sings Saturday, Feb. 21, 2015. (AP Photo/Craig Ruttle)

NEW YORK -- Activists, actors and politicians gathered Saturday in New York City to honor civil rights leader Malcolm X with a ceremony at the Harlem site where he was killed 50 years ago.

About 300 people converged to hear remarks from one of Malcolm X's six daughters, Ilyasah Shabazz, as well as elected officials. The ceremony was held at the Malcolm X & Dr. Betty Shabazz Memorial and Educational Center, formerly known as the Audubon Ballroom.

A blue light shone onto the floor in the exact spot where he was killed. A mural with images of Malcolm X adorned a wall.

Malcolm X was shot to death in the theater on Feb. 21, 1965, as he was preparing to address several hundred of his followers.

By the time he died, the Muslim leader had moderated his militant message of black separatism and pride but was still very much a passionate advocate of black unity, self-respect and self-reliance. Three members of the Nation of Islam were convicted of murder in his death. He had repudiated the Nation of Islam less than a year earlier.

In an interview with The Associated Press on the eve of the anniversary observance, Shabazz said she was pleased that the site is now a place for people to get a sense of empowerment.

"One of the great things about Malcolm is that he redefined the civil rights movement to include a human rights agenda," she said. "So while we are focusing on integrating schools, integrating housing and all these other things, Malcolm said that we demand our human rights 'by any means necessary.' And that means ... that we have to address these problems. That we have to identify them, and absolutely discuss them."

Plans for the ceremony include a keynote address by social and political activist Ron Daniels; a moment of silence at 3:10 p.m., to commemorate the time of the shooting, and the reading by actor Delroy Lindo of a eulogy for Malcolm X that was written by the late actor and activist Ossie Davis.

Malcolm X, whose full name was El-Hajj Malik El-Shabazz, was 39 when he was killed.