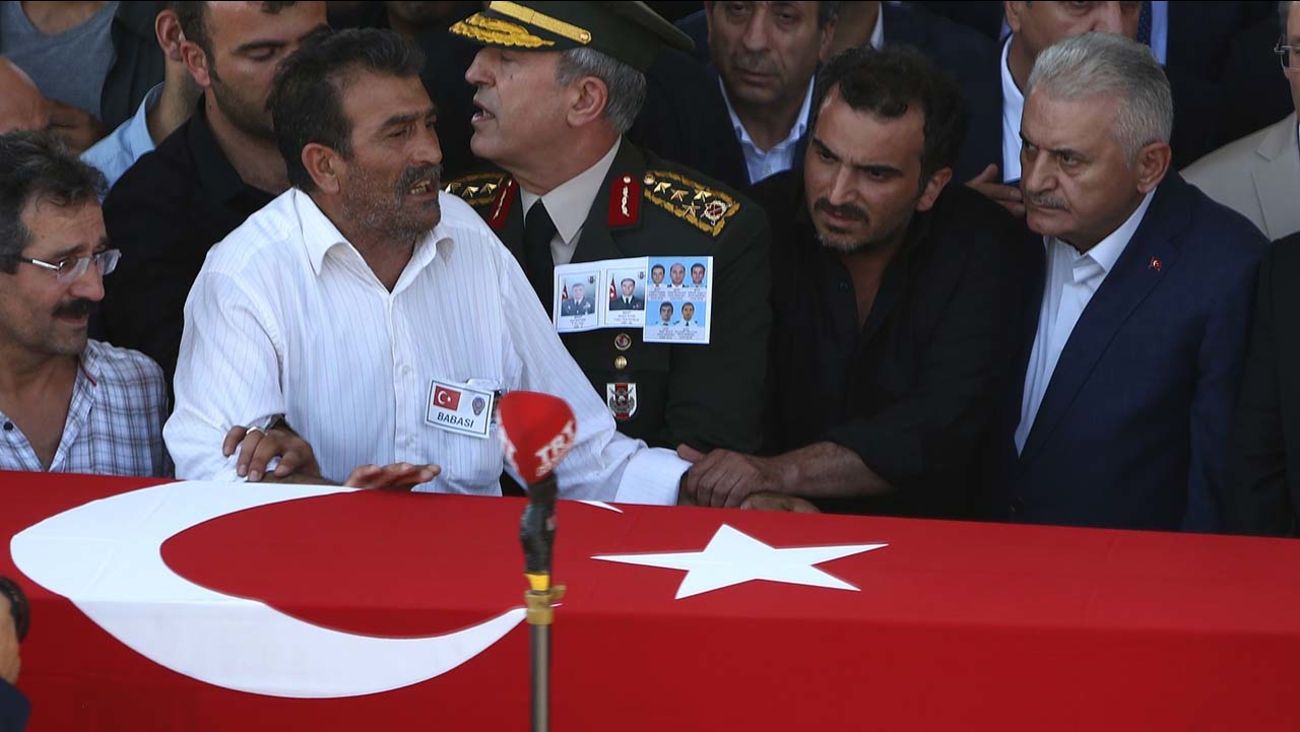 Turkey's Prime Minister Binali Yildirim, right, looks towards a mourner in front of the coffin of a policeman killed during the failed military coup last Friday (AP Photo/Hussein Malla)

Speaking on Monday, he said the toll comprises "208 martyrs" - in reference to government supporters - and 24 coup plotters.

With a cracked voice and tears, he repeated a question his grandson had put to him: "Why are they killing people?"

Earlier, government and military officials had put the fatalities in the anti-government camp at 104. The prime minister did not explain the discrepancy.

He said the pro-government dead were 145 civilians, 60 police officers and three soldiers.

The prime minister also said 50 coup backers and 1,491 government supporters were wounded in the unrest.

He put the total numbers of detentions since Friday's tumultuous night at 7,543, including 6,030 military.

Germany says negotiations for Turkey to join the European Union would end if the Turkish government decides to revive the death penalty following a failed coup.

Chancellor Angela Merkel's spokesman Steffen Seibert told reporters in Berlin Monday that the EU is a "community of values, therefore the institution of the death penalty can only mean that such a country could not be a member."

For the moment, he says that Germany and other EU countries are watching the internal Turkish debate on whether to institute the death penalty, but that the EU's position is clear.

The European Union and United States say Turkey must respect democracy and human rights in its response to a failed coup.

EU foreign policy chief Federica Mogherini says rule of law must prevail in Turkey at a time the government is rounding up suspects. She said Washington and Brussels agree on the need for Turkey to respect democracy, human rights and fundamental freedoms.

The European Union commissioner negotiating with Turkey on its accession bid believes the Turkish government is exploiting the failed coup to target internal opponents.

Johannes Hahn said Monday it appears Turkey's government "prepared" arrest lists before the weekend coup attempt and had been waiting for the right moment.

Hahn said of the government's post-coup response: "It is exactly what we feared." He spoke before a meeting of EU foreign ministers in Brussels.

Turkey has detained some 6,000 people. They include hundreds of judges and prosecutors, and more than two dozen generals.

Other media reports said police and military police officers and coast guards were also removed from duty. The government has blamed the failed coup - which led to at least 294 deaths and wounded 1,400 others - on supporters of a U.S.-based Muslim cleric who has become President Recep Tayyip Erdogan's chief opponent.

The Anadolu Agency says Monday the group questioned by prosecutors in Ankara includes former Air Force commander Gen. Akin Ozturk, who has been described as the ringleader of the foiled uprising.

Ozturk, who remained in active duty, has denied he was involved and insisted he worked to quell the uprising in statements he made to Turkish media.

Eight Turkish military personnel who landed in Greece in a helicopter during a military coup in Turkey are to appear in court in the northern Greek city of Alexandroupolis, charged with illegally entering the country.

They are likely to request a one- or two-day postponement during Monday's court appearance. Turkey is seeking their return, and all eight have requested asylum in Greece.

The eight landed in Alexandroupolis Saturday after issuing a distress call and requesting permission for an emergency landing. Their lawyer, Vassiliki Ilia Marinaki, has said her clients say they knew nothing about the coup and that the helicopter had been used to transport wounded. They say that shortly after finding out about the coup, they came under fire from the police and feared for their lives.

Saudi-owned broadcaster Al-Arabiya says Saudi authorities detained Turkey's military attache to Kuwait while he was at the airport in the eastern Saudi city of Dammam.

Quoting unnamed sources, the Dubai-based broadcaster said Monday that the attache, Mikail Ihsanoglu, was on his way to Düsseldorf, Germany via Amsterdam when he was detained.

The official Saudi Press Agency meanwhile reported that Saudi King Salman, who is vacationing in Morocco, called Turkish President Recep Tayyip Erdogan to "congratulate him on Turkey's return to normality" after an attempted military coup.

The European Union's foreign policy chief says foreign ministers on Monday will send a "strong message" that the rule of law and the democratic system of checks and balances must be respected in Turkey following the failure of a military putsch.

Federica Mogherini, the EU's high representative for foreign affairs, spoke before a meeting of the bloc's foreign affairs ministers in Brussels. The ministers will also be meeting for breakfast with U.S. Secretary of State John Kerry.

Belgian Foreign Minister Didier Reynders says Turkish authorities' reaction to the failed coup needs to be "proportionate." He says he was alarmed by the arrests of judges and calls for reinstatement of the death penalty against coup participants.

Warplanes have patrolled Turkey's skies following a failed coup, a sign that authorities fear the threat against the government is not yet over.

A senior official said Monday that F-16 jets guarded the Turkish airspace overnight, after a faction within the military launched an attempted coup late Friday against President Recep Tayyip Erdogan. The official spoke on condition of anonymity in line with government rules.

The coup plotters sent warplanes firing on key government installations and tanks rolling into major cities, but the rebellion was quashed by loyal government forces and masses of civilians who took to the streets. At least 294 people were killed and more than 1,400 wounded.

1 dead in pedestrian crash in SE Houston
HFD arson investigator to be honored at memorial service
Federal charges filed against man accused of killing HPD sergeant
Fake debt collection calls on the rise during pandemic
How to stop cyberbullying over Zoom during virtual learning
Show More
Unwilling UT band members say they won't play "The Eyes of Texas"
Fiancée of fallen HPD sergeant speaks exclusively with ABC13
HS student claims she was beaten by officers over face mask
Families of students with disabilities may be eligible for $1,500
21-year-old accused of killing ex-girlfriend turns himself in
More TOP STORIES News