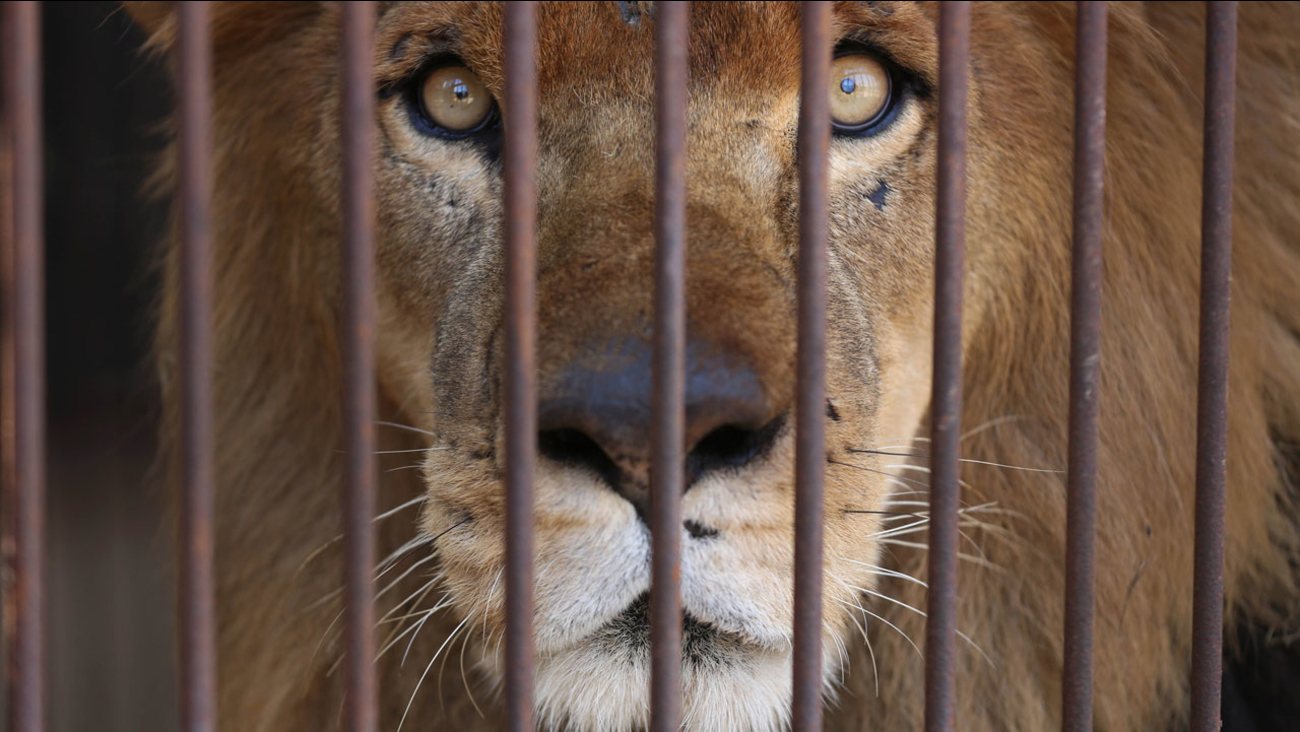 A former circus lion looks from inside his cage, in the outskirts of Lima, Peru, Tuesday, April 26, 2016. (AP Photo/Martin Mejia)

JOHANNESBURG, SOUTH AFRICA -- The roars of lions filled the cargo section of Johannesburg's OR Tambo International Airport Saturday evening as 33 lions rescued from South American circuses landed in South Africa where they will be released into a bush sanctuary for big cats.

It was the largest airlift of lions in history, said Jan Creamer, president of Animal Defenders International, which carried out the operation.

"These lion have suffered tremendously," Creamer said as the lions in crates were loaded onto trucks.

Nine of the lions were surrendered by a circus in Colombia. The remaining 24 were rescued in raids on circuses in Peru by the animal defense group and officials enforcing a crackdown on wildlife trafficking.

The lions will be placed in quarantine in enclosures at the 5,000 hectare Emoya Big Cat Sanctuary in Vaalwater in northern South Africa, started three years ago by a single mother and her teenage daughter.

The 33 lions will be monitored by a vet for their first weeks in Africa. They will then be introduced to each other in a one hectare bonding enclosure. Many of the lions were never allowed to have direct physical contact with other lions and have never been together without a fence or a cage separating them.

Due to their poor physical state, the lions will never be able to hunt again and will have to be cared for with food and water for the rest of their lives. Emoya will feed the cats with game meat which it buys in bulk.

The enclosures will be fitted with drinking pools, platforms and toys to ensure the lions don't become bored and will be steadily expanded as they become familiar with their new life, Heuser said.

Emoya, in an area with a mix of habitats including mountainous regions, rolling grasslands, forests, cliff caves and river gorges, has a strict non-breeding policy, Heuser told The Associated Press.

Female lions may receive contraceptive medications so they can remain with their mates, while males may undergo vasectomies to make sure than no lions are bred in captivity.

"The animals have no conservation value whatsoever. Many of them have been inbred," she said. "When we are sure that no breeding will take place, we allow males to interact with females. By then a pattern will have emerged ... and we will know which lions can be placed together."

Emoya was opened in 2012, when Savannah Heuser was 16. The sanctuary's first cat, a lion rescued from Cairo called Chanel, arrived in June 2013. The sanctuary is currently home to eight big cats, including two Siberian tigers.

The lions are part of 100 animals that were rescued in Peru. Bears, monkeys, birds and other native wildlife have been relocated to sanctuaries in Peru and a tiger has been sent to a new home in Florida.
Related topics:
sciencecircusanimal rescueu.s. & world
Copyright © 2021 by The Associated Press. All Rights Reserved.
TOP STORIES
Houston stretch of I-45 named most deadly highway in the U.S.
Man in custody after barricading himself in apartment, HPD says
Woman charged with murder after shooting homeless woman
Stepmom charged with murder 9 months after 4-year-old girl's death
Heat continues Monday, but cooling downpours return Tuesday
2 drivers die when out-of-control Ferrari crashes on Westheimer
10 women file HPD complaints against Deshaun Watson, lawyer says
Show More
Alex Bregman's road back to Astros from injury is underway
Video shows robber snatch bank bag and then speed off in Jeep
Man charged with shooting transgender woman he met on dating site
Texas firefighter's death in Cancun was not an accident, family says
Pink offers to pay Norwegian beach handball team's uniform fine
More TOP STORIES News