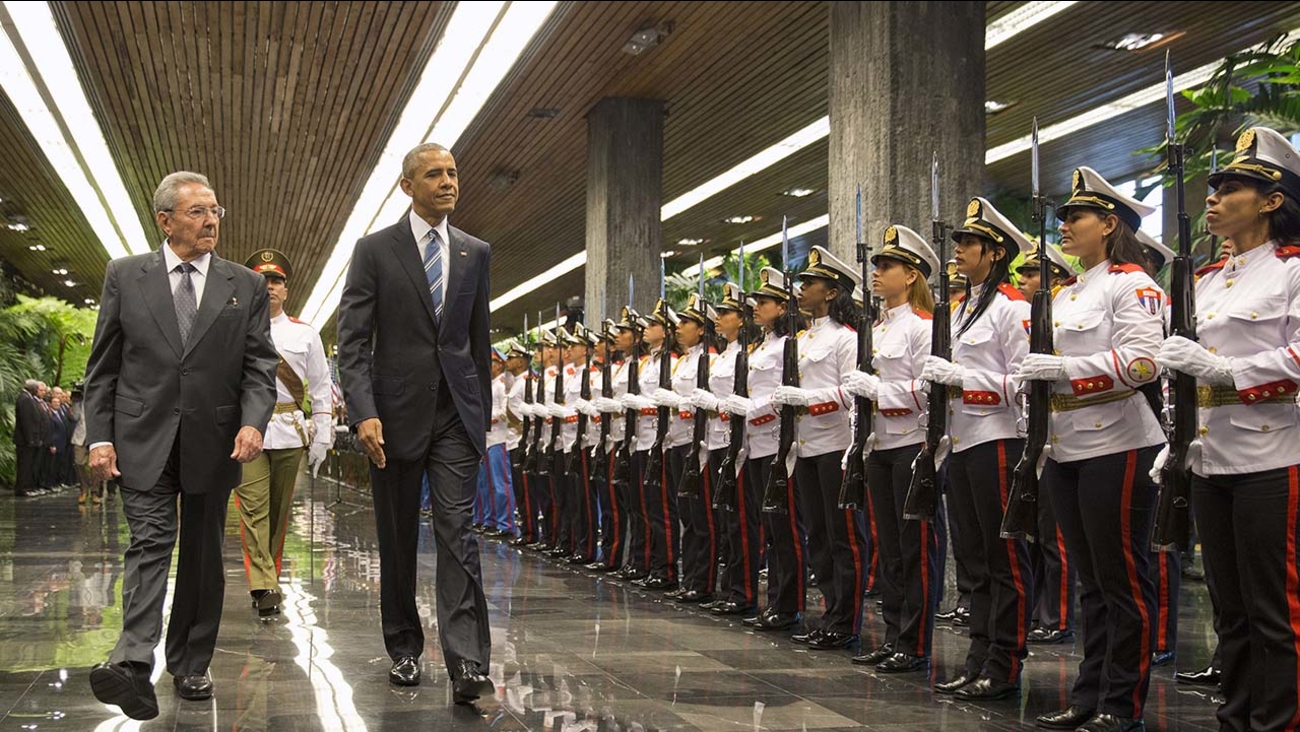 President Barack Obama with Cuban President Raul Castro during a welcoming ceremony at the Palace of the Revolution, Monday, March 21, 2016, in Havana, Cuba. (AP Photo/Pablo Martin)

HAVANA, Cuba (KTRK) -- President Barack Obama and Cuban President Raul Castro tussled Monday over differences on human rights and democracy but pledged to keep working on a new path forward between their two countries in a stunning diplomatic display.

Obama, midway through his history-making trip to Cuba, succeeded in getting Cuba's leader to submit to questioning by reporters, a routine occurrence for U.S. presidents but an anomaly in a communist country where the media are tightly controlled. Though Castro's answers were far from forthcoming, the mere occurrence of the news conference was significant in that way.

Asked by an American television reporter about political prisoners in Cuba, Castro seemed oblivious, first saying he couldn't hear the question, then asking whether it was directed to him or Obama. Eventually he pushed back, saying if the journalist could offer up names of anyone allegedly imprisoned, "they will be released before tonight ends."

After responding to a handful of questions, Castro ended the news conference abruptly, declaring, "I think this is enough."

Cuba is criticized for briefly detaining demonstrators thousands of times a year but has drastically reduced its practice of handing down long prison sentences for crimes human rights groups consider to be political. Cuba released dozens of political prisoners as part of its deal to normalize relations with Cuba, and Amnesty International said in a recent report that it knew of no prisoners of conscience in Cuba.

It's extremely rare for Raul Castro to preside over a formal news conference, although he has sometimes taken reporters' questions when the mood strikes. The White House worked feverishly to get him to agree, with negotiations going right up until the moment the two walked out of their meeting and faced reporters.

Obama, speaking earlier alongside Castro at the Palace of the Revolution, declared "this is a new day" for the U.S. and Cuba, which were estranged for half a century until he and Castro pursued a diplomatic thaw 15 months ago. Still, Obama said he and Castro had spoken openly about U.S. concerns over Cuba's human rights record, calling such delicate discussions a prerequisite to truly normalizing relations.

"This is something that we are going to stay on," Obama said, adding that if the two countries could make progress on the issue, their relationship could blossom. "In the absence of that, I think it will continue to be a very powerful irritant."

Castro, in a lengthy statement, worked to turn the tables on Obama by saying Cuba found it "inconceivable" for a government to fail to ensure health care, education, food and social security for its people - a clear reference to the U.S. Aiming to show the issue needn't be one-sided, Obama said he was open to hearing Cuba's concerns.

"I actually welcome President Castro commenting on some of the areas where he feels that we're falling short," Obama said. "Because I think we should not be immune or afraid of criticism or discussion as well."