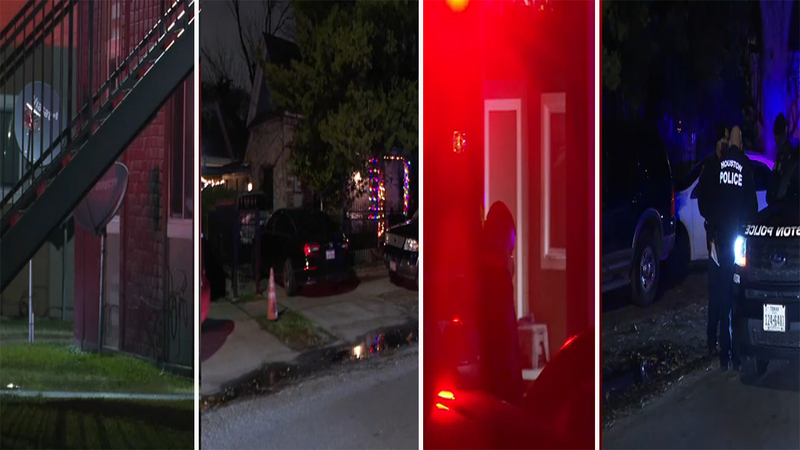 There were at least 10 major scenes overnight, eight of which were shootings. In total, at least three people were killed and at least 11 were injured.

It happened just before 2 a.m. in the 8100 block of Spring Cypress Road near Glen Haven Estates Drive.

The woman was in an eastbound Toyota Camry on Spring Cypress and lost control of the vehicle, according to the Harris County Sheriff's Office.

The Camry collided with a westbound Toyota Sequoia with a family of five inside.

The driver of the Camry died at the scene, deputies said. A man, woman and three children inside the Sequoia were taken to a hospital with non-life threatening injuries.

Deputies believe speed may have been a factor in the crash and the woman who died was not wearing a seatbelt. Her identity wasn't immediately released, but deputies believe she was between 20 and 30 years old.

Two hours into a new year and we’re already heading to two separate fatal crashes. One at the 18700 blk of Glenn Haven Estates in the Spring area. Just now, another fatal major with possible pinned individuals, Lifeflight requested at the 1800 block of Spring Cypress. #HouNews

A man was taken by Life Flight to Memorial Hermann after a firework exploded around 2 a.m. on Thicket Grove Road.

Investigators were conducting interviews to determine what caused the injury to occur.

Be careful with the fireworks. Earlier our units responded to an incident at the 18200 blk of Thicket Grove involving an adult male that was said to have sustained a serious injury while handling fireworks. The male was transported by Lifeflight. #HouNewe

HCFMO investigators are on scene assisting @WestlakeVFD with a fireworks injury in the 18200 block of Thicket Grove Rd. One adult male has been taken by life flight to Memorial Herman after a firework exploded causing major injuries to his head and upper body. pic.twitter.com/mqTXkvRfsB

While ringing in 2021, a 60-year-old grandfather shot his 24-year-old granddaughter in the stomach on Fulton Street, according to police.

Officers say he was very drunk and fired his gun into the air when the stray bullet hit his granddaughter. She was rushed to the hospital.

She was taken into surgery, and her condition is unknown at this time. The grandfather was arrested.

Central officers are on a shooting at 1700 Fulton. One patient transported to an area hospital. #hounews CC13

8-year-old shot in the hand during celebratory gunfire

In northwest Harris County, an 8-year-old boy was shot in the hand 10 minutes into the new year.

The little boy was sleeping in his bed when he was shot. Police say he's expected to survive.

There are no suspects in the shooting. Police don't know where the stray bullet came from.

Man shot in the chest in northeast Houston

Houston police say a man was shot in the chest in the 11100 block of Cheeves near Hooper around 10 p.m.

The man was transported to the hospital. No further information was provided

Northeast officers are on a shooting at 11100 Cheeves and Hooper. One adult male was transported to an area hospital. #hounews CC13

Houston police were investigating at the scene.

No further information on the man's condition or possible suspect(s) was provided.

Northeast Patrol officers are on the scene of a shooting in the 2100 block of Parker Rd. where an adult male was shot. Investigation is ongoing. #hounews CC12

Houston police investigated a shooting in the 300 block of Heatherbloom before 9 p.m. where a man was found shot.

He was transported to the hospital in stable condition.

Northeast Patrol Officers are on scene investigating a shooting in the 300 Block of Heatherbloom where an adult male was transported in stable condition. Motive for the shooting is unknown. Inv is ongoing. #hounews CC12

Man shot and killed during argument

Harris County Precinct 1 deputies responded to a reported disturbance in the 7300 block of Alabonson around 9 p.m.

One man was found with gunshot wounds. He was transported to the hospital where he later died.

The suspect, identified as 37-year-old Darius Smith, drove off after the shooting, but later called authorities himself and said he shot the victim, 33-year-old Kenneth Boyd.

Smith was arrested and charged with murder.

Precinct 1 units responded to a shooting at the 7300 blk of Alabonson. Units determined 1 adult male suffered a possible gunshot wound and was pronounced deceased at a hospital. A person has been detained. @HCSOTexas Homicide and CSU are enroute. No addtl details. #HouNews pic.twitter.com/XpGEgVFaeo

It appears a disturbance between two males led to this shooting. Darius Smith, 37, has been arrested & charged with Murder for the shooting death of Kenneth Boyd, 33. #HouNews https://t.co/OgSGJiGleb

Harris County Precinct 4 deputies responded to the 20900 block of Roxette Court sometime before 9:30 p.m. after a reported weapons disturbance.

According to Sheriff Ed Gonzalez, a man at a family gathering fired shots at others then barricaded himself in the home.

A SWAT team was deployed to the scene

The man was later taken into custody and no one was hurt, Gonzalez updated in a tweet.

Update to SWAT scene on Roxette Ct: the scene has concluded. The male was taken into custody without incident. Initially the male fired multiple shots at family members inside the residence, thankfully no one was hurt. #HouNews https://t.co/611n7yXQaU

Harris County sheriff's deputies responded to a reported shooting around 8:30 p.m. Thursday in the 600 block of Kiley Drive in north Harris County.

Upon arrival, deputies found a 16-year-old dead on the roadway.

Deputies asked anyone with possible information to reach out to the Harris County Sheriff's Office or Crime Stoppers.

To our community members near the Remington Ranch area, near North Fwy & Rankin: @HCSOTexas units responded to an in-progress call at the 600 blk of Kiley Drive. Units determined a male suffered a gunshot wound and was confirmed deceased at the scene. pic.twitter.com/46JARud8Ui