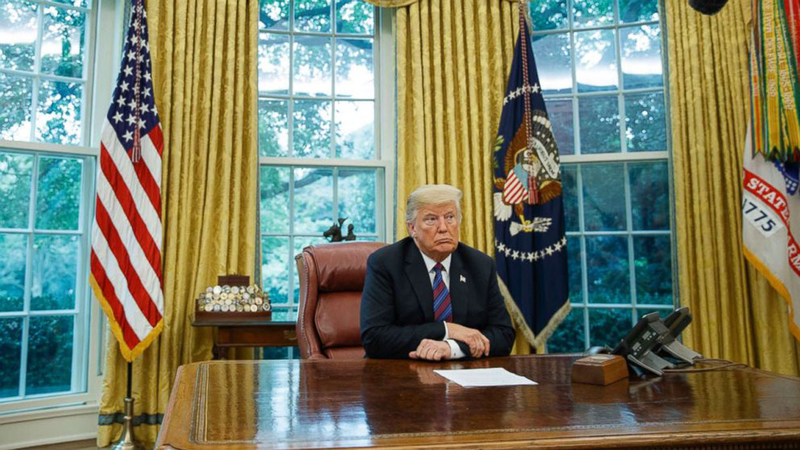 Woodward's 448-page book, "Fear: Trump in the White House," based on hundreds of hours of interviews with current and past administration officials and documents, gives a behind the scenes look at the Trump presidency, according to excerpts published Tuesday in the Washington Post.

While Woodward says the book comes from firsthand reporting, he does not directly identify many sources for the quotes he includes. ABC News has not independently obtained a copy of the book, which is set for release on September 11.

The account of the book by the Post depicts the president as angry, frustrated, and paranoid about special counsel Robert Mueller's investigation. The president reportedly lashed out at Sessions to former staff secretary Rob Porter for Sessions recusing himself from the Russia probe.

"This guy is mentally retarded. He's this dumb Southerner," Trump reportedly told Porter about Sessions. "He couldn't even be a one-person country lawyer down in Alabama."

The book says the president's former attorney, John Dowd, was concerned that the president would commit perjury if he sat for an interview with Mueller, according to the Post

Woodward reports that Dowd told Mueller he was not going to let the president "sit there and look like an idiot." He was especially concerned about a transcript of the interview getting leaked and revealed to leaders overseas, Woodward wrote.

Dowd is quoted as telling the president, "Don't testify. It's either that or an orange jumpsuit."

Still, the president is quoted as telling Dowd he would be "a real good witness" despite later losing his cool during a practice session, according to the Post account, and saying, "This thing's a goddamn hoax," and "I don't really want to testify," according to the published excerpts.

CNN, which said it also obtained an advance copy of the book, reports that Trump's attorneys believe him incapable of telling the truth.

"He just made something up. That's his nature," Dowd said to Mueller, according to CNN's account.

The book paints a picture of the president constantly at odds with his own advisers, including Secretary of Defense James Mattis and White House chief of staff John Kelly.

The White House did not respond to an ABC News request for comment about the book and the reported contents.

President Trump told Woodward in a phone call that he would have spoken to Woodward for the book, but he was not told about an interview request.

In a transcript of the call between Trump and Woodward released by the Washington Post, Woodward told the president that he spoke to "six or seven" people about getting an interview and put in a request with presidential adviser Kellyanne Conway and asked Trump ally, Republican Sen. Lindsay Graham of South Carolina, to put in a good word for him as well.

Trump later acknowledges in the call that Graham briefly mentioned it to him. Woodward also says he sat down with Conway to discuss a Trump interview, according to the phone call transcript.

"It's really too bad, because nobody told me about it, and I would've loved to have spoken to you. You know I'm very open to you. I think you've always been fair. We'll see what happens," Trump said.

In the book, Woodward writes about Mattis and Kelly's frustrations about working with the president, at times defying his demands.

The Post writes that the president dismissed the importance of a military presence in the Korean Peninsula following a National Security Council meeting in January. Mattis became frustrated by the president's response, according to Woodward. "Mattis was particularly exasperated and alarmed, telling close associates that the president acted like - and had the understanding of - 'a fifth- or sixth-grader,'" Woodward writes.

Kelly also questioned the president's ability intelligence, according to Woodward.

"He's an idiot. It's pointless to try to convince him of anything. He's gone off the rails. We're in Crazytown," Woodward reports Kelly as saying. "I don't even know why any of us are here. This is the worst job I've ever had."

Woodward reports that aides tried to hide documents or information from the president that they felt could endanger national security.

"A third of my job was trying to react to some of the really dangerous ideas that he had and try to give him reasons to believe that maybe they weren't such good ideas," said Porter, according to CNN.

In one case, Mattis simply ignored the president's request. Following Syrian leader Bashar Al-Assad's brutal chemical attack on his own people, the president reportedly told Mattis, "Let's f------ kill him! Let's go in. Let's kill the f------ lot of them."

After telling the president he would "get right on it," according to the Post, he then turned to an aide and said, "We're not going to do any of that. We're going to be much more measured."
Report a correction or typo
Related topics:
politicswashington dcpolitical scandalbooksu.s. & worldpresident donald trump
Copyright © 2022 ABC News Internet Ventures.
TOP STORIES
Timeline breaks down Uvalde shooter's movements day of massacre
16-year-old airlifted to hospital after being shot, deputies say
Our coolest morning in nearly a month
Onlookers urged police to charge into TX school: 'Go in there!'
Protests planned against NRA meeting following Uvalde deadly shooting
3 dead in apparent murder-suicide in NW Harris Co., sheriff says
TX school shooting leaves at least 19 children, 2 adults dead
Show More
Here's what to know about NRA meeting in Houston
Uvalde school shooting: What we know about 19 kids, 2 teachers killed
Beto O'Rourke confronts Texas gov. at Uvalde shooting press conference
Houston mayor after shooting in Uvalde: 'Our values are messed up'
HISD staff encourage talking with kids about Uvalde tragedy
More TOP STORIES News