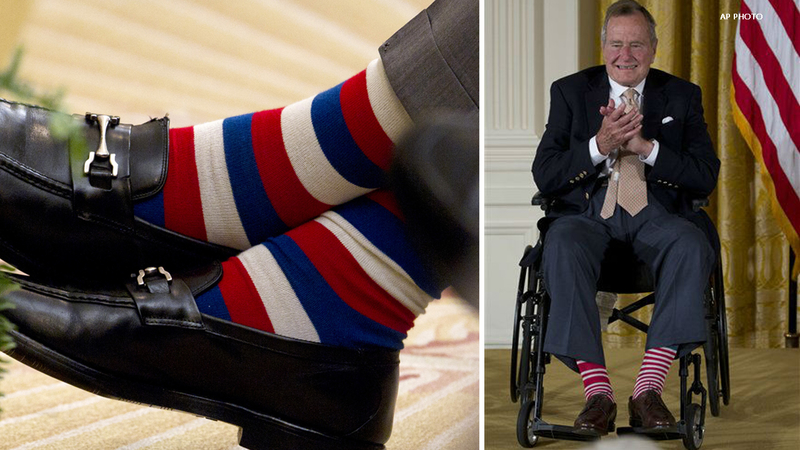 It feels like there's a national day for everything, but if there was ever one to get behind, today's might just be it.

It's National Sock Day. But it's also a time where many are thinking of late President George H.W. Bush, who became somewhat of a style icon for the colorful attire on his feet.

Some will be celebrating the day and helping those in need tonight with a Tacky Sweater and Crazy Sock Party, a private event, hosted by the Barbara Bush Houston Literacy Foundation.

President Bush had several types of socks for different occasions, whether it was supporting Houston sports teams or even commemorating the legacy of his wife, Barbara.

He wore socks with books on them to honor Barbara's dedication to literacy when she passed away in April.

The president will be carried to his final resting place in socks that carry special meaning. They will pay tribute to his lifetime of service, starting as an 18-year-old naval aviator in the war.

The 41st President will be carried to his final rest wearing socks that pay tribute to his lifetime of service, starting as an 18 year-old naval aviator in war. That legacy is now being carried, in part, by the brave, selfless men and women aboard @CVN77_GHWB. #Remembering41 pic.twitter.com/OabtK756fO

Looking for other ways to get a leg up on the sock competition today? The National Day Calendar recommends pulling out your rarest pair of socks and posting a photo of them on social media using the hashtag #NationalSockDay.
Report a correction or typo
Related topics:
societycalendarnational day
Copyright © 2022 KTRK-TV. All Rights Reserved.
TOP STORIES
3 officers shot near downtown Houston, police say
Man arrested in corporal's murder is 25-year fugitive, officials say
Deputies escort body of fallen HCSO Sgt. to funeral home
Another cold front passes through tonight
Biden confirms he will nominate first Black woman to SCOTUS
Toddler credited with saving family of 7 from devastating house fire
Amy Schneider's 'Jeopardy!' accomplishments reach past podium
Show More
Armed driver was trying to rob another driver on Katy Fwy, police say
These jobs are hiring, and they pay more than $14 an hour
K9 stabbing suspect accused of killing father with dumbbell
No bond granted for suspect in Pct. 5 corporal ambush killing
Attorney of man questioned in dad's death wants him to seek help
More TOP STORIES News