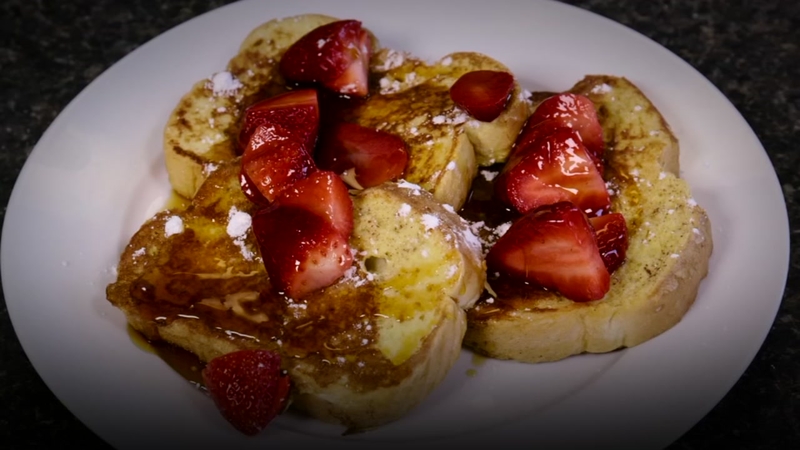 HOUSTON, Texas (KTRK) -- Today marks a landmark food holiday for those who crave a sweet and savory brunch.

Nov. 28 is National French Toast Day, which celebrates the dish that consists of a seared egg-soaked piece of toast and traditionally topped with syrup and powdered sugar.

Of course, the dish is easily customized to include toppings like fruit, chocolate chips and other flavored syrups.

The different ways of topping French toast has pushed many eateries in Houston to offer their unique versions.

We found several restaurants that serve up the dish differently, from adding fried chicken wings to injecting some Bourbon Street.

The restaurant is offering its Fruity Pebbles French Toast all day long in honor of National French Toast Day. The toast is drenched in a sweet glaze and topped with cereal, bacon, and fresh fruit for $14.

They offer a Bananas Foster French toast made with Texas toast, banana and maple rum caramel, and toasted marshmallow fluff for $11.

Their Classic French Toast on custard-dipped brioche bread is pan seared, sprinkled with powdered sugar, and served with maple syrup. It's offered at each of the restaurant's five Houston area locations for $8.50.

The restaurant boasts heavy influences in Southern cuisine, with their takes on fried chicken, sweet potato donuts, and wings and waffles among their menu choices.

The only thing missing is the figurine baby.

The Breakfast Klub is a brunching institution located in Midtown. It is so popular, the diner customarily hosts a queue of hungry customers outside.

Its French toast is as important as the menu's other breakfast standards, like the Breakfast Klub's intentionally misspelled "biskits & gravy" and "klub's benedikt."

According to the menu, the dish consists of "4 Texas toast triangles battered, lightly grilled and sprinkled with powdered sugar."

Although the menu doesn't get into the specifics of making this dish, you can be sure to get an autumnal spin on a breakfast favorite.

House of Bowls, located in Chinatown just off Bellaire Boulevard, is indeed a Chinese food restaurant.

But, hidden underneath the soy sauce and grains of rice is a breakfast menu that is traditional in its preparation.

Diners in the past have suggested eating off the main menu and then ordering French toast for dessert. It's bold and yet something that must be tried.

The restaurant comes from celebrated chef Hugo Ortega. If his spin on Mexican cuisine is any indication, his take on French toast is a must-order.

Backstreet also proved that your mouth can water from simply reading.