Coyote in the bathroom! Critter runs into convention center 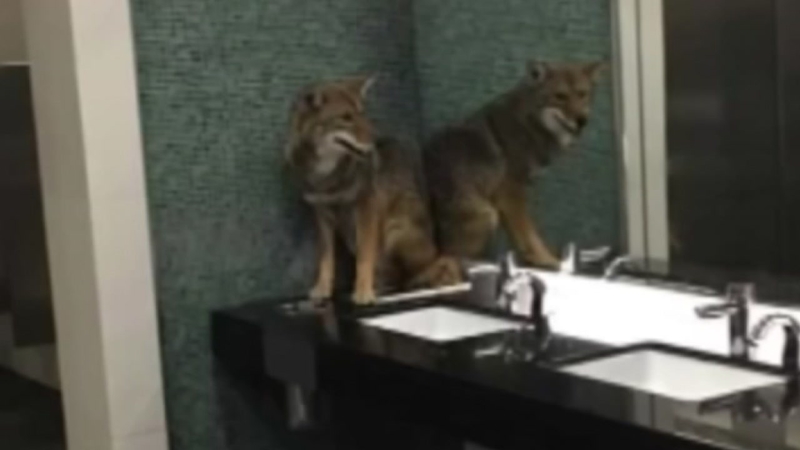 Coyote in the bathroom! Critter runs into convention center

NASHVILLE, Tennessee -- A coyote sprinted past a security checkpoint and into a Nashville convention center where a boat show was packing up Sunday night.

According to the Music City Center, at around 10:20 p.m. the coyote entered through a loading area and ran into an exhibit hall before staff trapped it in a bathroom.

Police and animal control officers used a catch pole to capture the animal, which was released in a wooded area.

Bluestone said, "I don't want to say coyotes in bathrooms are going to become the norm, but because of intrusion into their habitat, it's going to be close living."
Report a correction or typo
Related topics:
pets & animalstennesseeanimal rescuecoyotesanimalanimal news
Copyright © 2022 by The Associated Press. All Rights Reserved.
TOP STORIES
3rd monkeypox case confirmed in Houston area, officials say
There are many ways to eat healthy amid high food prices, experts say
Biden signs landmark gun measure, says 'lives will be saved'
A hot weekend ahead of more widespread rain chances next week
Bank of America apologizes to refugee family for account mix-up
6 people killed over span of 12 hours in isolated incidents in Houston
Love the outdoors? Galveston Island State Park is reopening
Show More
Astros' 2nd time ever to no-hit NY
Houston Pride 2022: Where and how to celebrate
Teenage daughter stabs father during fight in SW Houston, police say
17-year-old charged with murder after giving friend ride
Settlement would forgive $6B for defrauded college students
More TOP STORIES News