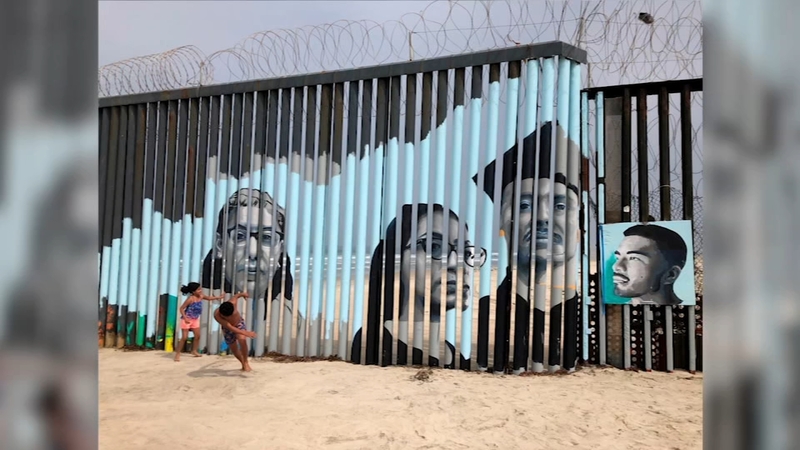 FRESNO, California -- As the waves pushed in at Tijuana Beach, several artists were feet away, stroking up and down the Mexico border wall.

They were painting a mural of six people who came to the United States illegally as kids and were later deported as adults.

She said the idea came to mind in 2016 after visiting the border for the first time and seeing the artwork.

"It caught my attention," said De La Cruz. "We're cleaning the space by having art speak for itself, so I had the idea to paint by the beach because hardly anyone had ever touched that side."

Making it part of her Ph.D. dissertation, De La Cruz decided to share immigration stories through the form of art.

He said he has painted hundreds of murals all over the country. This one at the border, though, hit home.

"I remember crossing the border with my mom, undocumented and being detained. And even though we didn't have inhumane treatment, it created an impact on me," said Carrera.

Carrera put that impact into eight days of work, capturing the essence of immigrants.

"Andy's case, he came here as a baby, he grew up in the Central Valley (of California), he served the military, but something happened with the Army. He wasn't able to become a citizen," said De La Cruz.

It's one story that these two artists hope can paint over some of the tension amid all the politics.

"If we can inspire, we can create a change," said De La Cruz. "I don't want it to be a trend for a week, and then people forget about what's going on."

If you happen to visit the U.S.-Mexico border and see the mural, you can take your phone out, scan a QR code next to the faces and hear first-hand stories from the people who were captured in the artwork.

A new mural in the making will honor the Mexican-American culture in Houston.