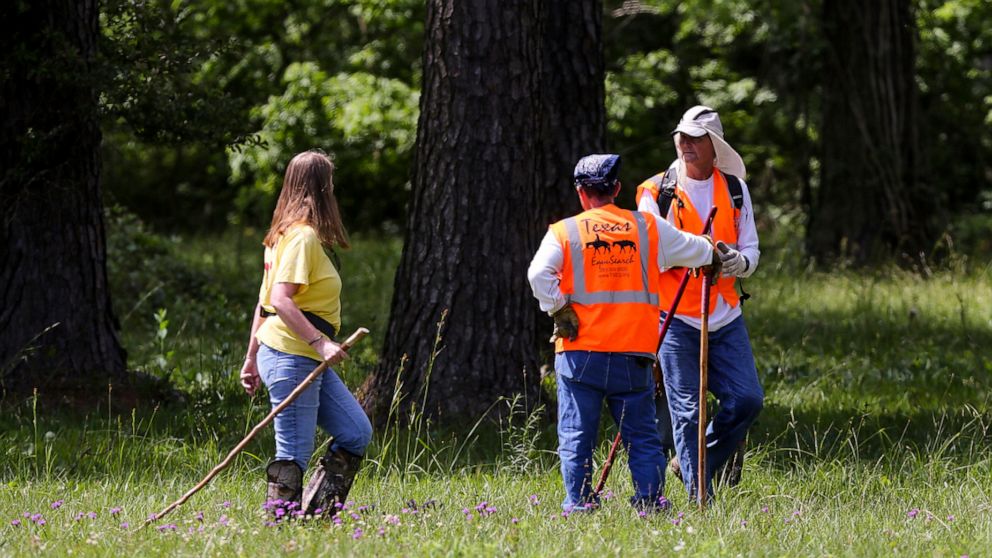 As volunteers passed out missing person fliers and helped Texas police search for her 4-year-old daughter, Brittany Bowens broke down in tears Monday as she expressed her darkest fears for the little girl who recently underwent brain surgery.

"I'm terrified for Maleah," Bowens said of her daughter, in an interview with ABC station KTRK-TV in Houston.

The search for Maleah Davis intensified on Monday as volunteers passed out fliers in Houston and searched a field near where Derion Vence, 26, the former fiance of Maleah's mother, told police three men accosted him when he had car trouble on Friday evening and took him, the girl and his 1-year-old son hostage before dumping him and the toddler on the side of a road and fleeing with the little girl.

Vence told police that he and the children were headed to pick up Bowens at George Bush Intercontinental Airport when they were encountered by the men who took Maleah.

"My spirit is broken. I feel so lost," Bowens told KTRK. "I can't concentrate. I can't focus. It's just ... it's so overwhelming for me. It doesn't seem real."

Volunteers from a group called Texas EquuSearch set out on foot and by ATV in a field in northeast Houston, where Vence told police he was assaulted by Maleah's kidnappers after he noticed something wrong with the Bowens' silver 2011 Nissan Altima that he was driving and pulled over.

"According to Derion, what happens next is a blue pickup truck pulls up behind him, two Hispanic males get out. One of them makes a comment, saying that Maleah looks very nice, looks very sweet. The other male hits Derion in the head. Derion loses consciousness," Sgt. Mark Holbrook of the Houston Police Department Homicide Division said during a news conference on Sunday.

Vence told police that he kept going in and out of consciousness, but at one point he was in the back of the suspects' truck with his son and Maleah and that there were now three suspects in the vehicle driving them around, Holbrook said. He said the next time Vence woke up, about 6 p.m. on Saturday, he was on the side of the Southwest Freeway with his toddler son in Sugar Land, some 22 miles southwest of Houston.

He told police he tried to flag down a passersby, but when no one stopped he walked to Houston Methodist Sugar Land Hospital, arriving about 10 or 11 p.m. He was treated for a head injury and police were called.

Holbrook said Bowens' Nissan Altima was spotted by a traffic camera at an intersection in Sugar Land at 2:54 p.m. on Saturday, but police have been unable to locate the vehicle.

He added that Vence described the suspects' pickup truck as a 2010 Chevrolet crew cab.

Holbrook said investigators have not found any evidence, including security video or independent witnesses, to corroborate Vence's story.

He said there is about a 21-hour gap between the alleged assault and when Vence woke up on the side of the road that Vence doesn't remember.

Holbrook said investigators have also interviewed Maleah's biological father, who is cooperating with the investigation.

An Amber Alert issued on Sunday for the girl -- who was last seen wearing a pink bow in her hair, a light blue zip-up jacket, blue jeans and sneakers -- remained in effect on Monday.

Tim Miller of Texas EquuSearch said his group is praying that Maleah is found alive.

"We want to start checking every single dumpster just in case," Miller told KTRK. "We believe in miracles. Let's hope we get one."

"I'm choked up right now thinking about her," Miller added. "I've been on these cases before. If it doesn't touch your heart, and you don't get emotional, you're just not human."

Maleah has had several brain surgeries, Holbrook told reporters at Sunday's news conference; including one that was performed last month.

"She needs a lot of care and she was sick this week, too," Holbrook said.