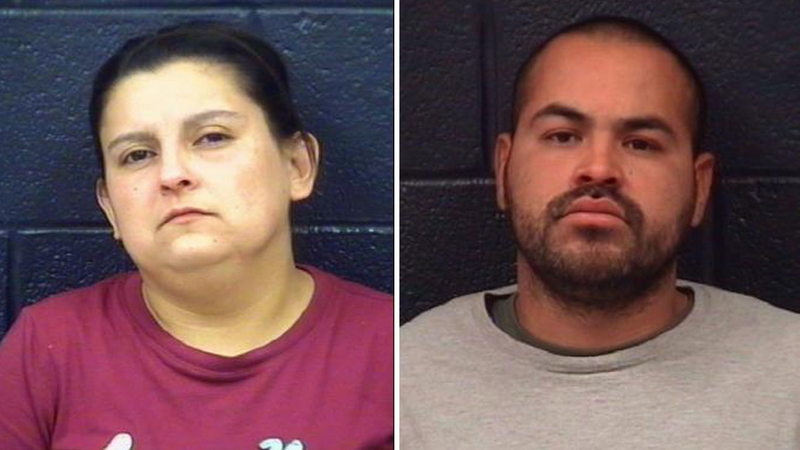 LAREDO, Texas (KTRK) -- The parents of a 2-year-old girl were sentenced Friday for putting her remains in a container full of acid.

Monica Dominguez and Gerardo Zavala-Loredo were both arrested in February after police searched their apartment and found the remains of their daughter, Rebecka Zavala, in a five-gallon container hidden in a bedroom closet.

Laredo police say the parents told them they were trying to dispose of the girl's remains after she drowned without adult supervision.

"As you can imagine, it's very difficult for all of us in law enforcement and for the first responders to be in a situation to come across a scene like we did," said District Attorney Isidro Alaniz.

Both parents pleaded guilty to tampering with evidence of a human corpse Friday.

Zavala-Loredo took a plea deal and was sentenced to 14 years in prison. Dominguez additionally pleaded guilty to endangering a child and abuse of a corpse. She will serve a total of 20 years in prison.

Dominguez had a previous probation charge from an injury to a child case in which her 9-month-old son suffered six bone fractures. Her judgment will run consecutively with a 10-year revocation sentence for violating her probation in the prior case.

According to KGNS, neither parent could be charged with murder because the state of the toddler's remains prevented authorities from determining a cause of death.

The video above is from a previous story.
Report a correction or typo
Related topics:
laredochild deathtexas newstoddlerparents charged
Copyright © 2022 KTRK-TV. All Rights Reserved.
TOP STORIES
Daylight shows home destroyed after standoff with shooting suspect
What we know about man accused of shooting 3 HPD officers
Widow delivers heart-wrenching eulogy for NYPD detective
Suspect arrested after 30-minute chase ends on I-45 in Texas City
Rainy Monday and arctic cold front on the way after sunny weekend
5 people charged in connection with Pct. 5 corporal's murder
How many times can I reuse my N95 mask?
Show More
Decades after TV anchor disappears, convicted rapist denies connection
Driver dies after slamming into 18-wheeler's trailer on US-59
Woman shot in the shoulder during robbery set up in SW Houston
Prepare for a major closure at I-69 and 610 West Loop this weekend
Officers escort body of corporal killed in ambush to funeral home
More TOP STORIES News