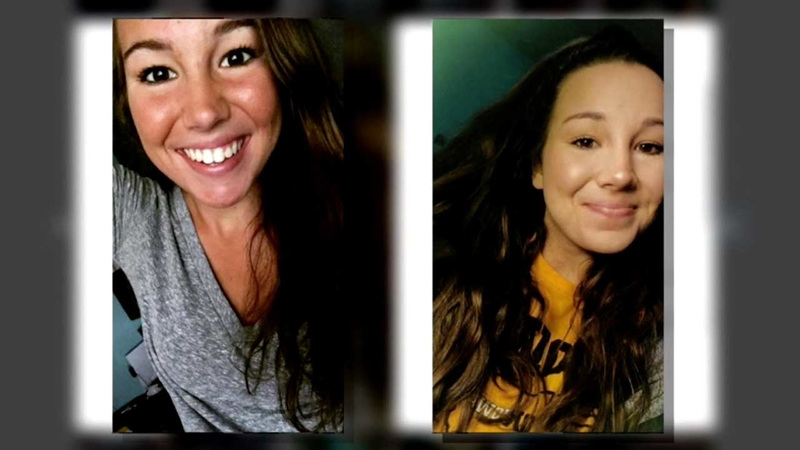 BROOKYLN, Iowa -- Missing Iowa woman Mollie Tibbetts has not been seen for almost a week since she went for a run on July 18, leaving family and loved ones desperate to find her.

Here's a timeline of what we know about the college student's disappearance and the frantic search.

Monday, July 16
This was the last day Dalton Jack, Tibbetts' boyfriend, said he saw his girlfriend in person.

Jack drove to his job at a construction company at 50 miles away, according to ABC News. Tibbetts was staying at his house and watching his dogs.

5:30 p.m. Tibbett was seen out on a run around this time, her aunt, Kim Calderwoods, told WOI. ABC News reports she was wearing gym shorts, a black running bra and running shoes. Jack said she would have taken her fitness tracker and phone with her on her run.

10 p.m. Jack opened a SnapChat from Tibbetts. The snap contained a selfie Tibbetts took, and Jack said she appeared to be inside. It's unclear what time the photo was taken.

Morning: Jack sent Tibbetts a message, but he said he didn't notice it went unread.

Afternoon: A coworker of Tibbetts' called Jack to tell him she hadn't shown up for work and also hadn't called in sick. Jack began calling loved ones, none of whom had seen her at any time on Thursday.

Later Thursday: Tibbetts' family reported her missing to police on Thursday, according to the Des Moines Register.

A Facebook group called "Finding Mollie Tibbetts" is started to help find her. The group is used to distribute fliers and organize a search.

WOI reports that hundreds of people turned out to help with the search. The public is asked to contact the Poweshiek County Sheriff's Office with any tips.

The University of Iowa, where Tibbetts is due to be a sophomore, releases a statement that they are monitoring the situation and offering support where needed.

Our thoughts are with Mollie Tibbetts’ family and friends. The University of Iowa is monitoring the situation and will offer support as needed. More information: https://t.co/NmtZv0Djqs

PLEASE help us find this young Iowa woman. She’s been missing since July 18. My family has a home in Brooklyn IA & she is a Hawkeye. Look at her pic if you’re passing through IA on Interstate 80 also. #MollieTibbetts #IowaStrong 1-800-346-5507 https://t.co/C8AaT7ZG7w

Jack spoke with WOI and ABC News. He said he's optimistic that Tibbetts will be home soon and that if she can hear him he wants her to know that "I miss you so much, and I love you."

Jack said he is continuing to send text messages to Tibbetts, though they all remain unread.

"She is just such an outgoing, fun, loving life, loving person," she told ABC News. "She was getting ready to move into her first apartment."

She added that there are "no words to describe how you feel when you don't know where or how your child is."

She also said Jack's brother is scheduled to get married in the Dominican Republic on August 2. Tibbetts had been planning to go with Jack for the wedding and she is close to the bride and groom, her mom said.

Poweshiek County Sheriff Thomas Kriegel told ABC News this is the longest anyone in the tight-knit community has been missing in his memory. He said in addition to the searches on foot, a plane, a helicopters and kaykers have gone out looking for her.

"We're surrounded by farm ground -- corn and soy beans. Right now the corn is probably eight, nine feet tall. The only way you can search it is basically walk down every other row," he said. "It's difficult. Even the planes flying over have a difficulty looking down in the corn row."

The latest post on the Facebook group thanked everyone for the support and said there are no updates.