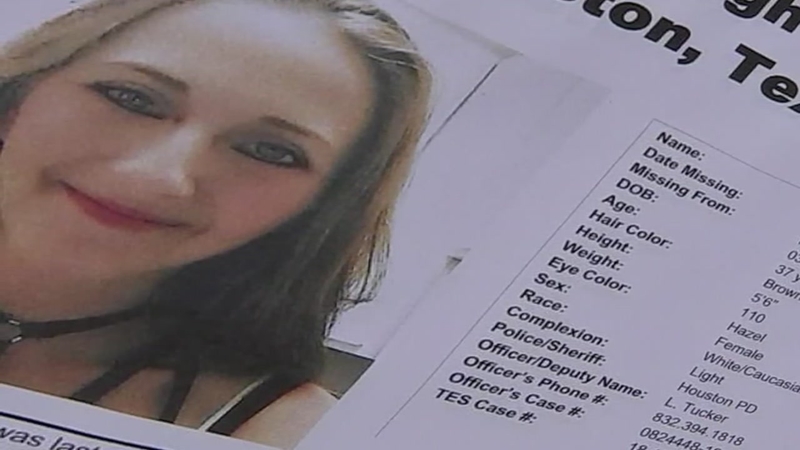 HOUSTON, Texas (KTRK) -- Houston police and the family of a woman who has been missing for three weeks are making a plea for more information about her disappearance.

Police have since charged 37-year-old Alex Haggerty in her death.

Homicide detectives explained how they were able to charge Haggerty with her murder without having a body.

Authorities say that they talked to several family members and acquaintances who claimed he told them that he killed Burfield. Haggerty also allegedly described different methods of killing her to each person, including stabbing, shooting and suffocation.

Investigators say Haggerty denies telling people that he murdered her.

“You would have loved her. Everyone who met her loved her. She’s didn’t deserve what happened to her. We just want her found," said Brittany Burfield's mother. #abc13 #hounews https://t.co/6Ckp3i8bms

On Thursday, Burfield's mother, Tricia Valentine, spoke to reporters, thanking the volunteers, members of law enforcement and Houstonians who have come forward to help search for her daughter.

Valentine described her daughter as a sweet, loving person who only had a handful of friends.

"You would have loved her. Everybody that met Brittany loved her. She did not deserve what happened to her. We just want her found," Valentine said.

"You would have loved her." The mother of Brittany Burfield described her as sweet and loving.

Haggerty is behind bars on an unrelated charge for choking a woman. In that case, his bond was set at $15,000.

Officials say he does have a history of violence with women, particularly those who are in a position of authority.

According to investigators, Haggerty had recently gotten out of prison and was staying with Burfield at her apartment. They do not believe the two were dating.

A friend of Haggerty's confirmed to police that she also lived at Burfield's apartment. She is not considered a suspect.

Authorities believe Burfield either asked the pair to leave or kicked them out after living with her for three weeks to a month. Haggerty and the friend then went to live in the Third Ward, where his family stays.

Investigators searched a home on Drew Street in Third Ward, where Haggerty's mother lived. They said they found some of Burfield's clothes and other personal items in the yard.

The search for Brittany Burfield is intensifying after she disappeared weeks ago.

Haggerty was later seen in Burfield's car after she was reported missing. When two cadaver dogs sniffed the vehicle, they alerted authorities to the trunk, indicating that a body was in it at some point.

Authorities say they have phone records of Haggerty calling his parole officer with her cell phone, which he denies.

"I know that Brittany is with the Lord right now and that's who gives us strength to make it through," Valentine said.

Valentine added that Haggerty has tried to describe her daughter as someone who partied a lot, but she said that is not the case. According to Valentine, Burfield took pain pills because she suffered from Lyme disease.

Burfield has a two-inch tattoo of a female Egyptian eye on the back of her neck.

Detectives are asking anyone who might have seen Haggerty or Burfield in the days surrounding her disappearance to come forward.