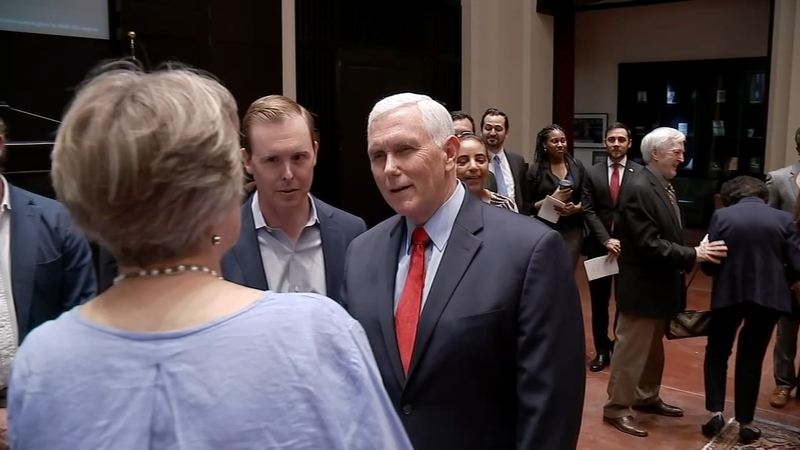 HOUSTON, Texas (KTRK) -- Former Vice President Mike Pence was crystal clear on his thoughts about where U.S. energy policy should lead during an address at Rice University's Baker Institute on Tuesday.

"The stakes are too high. We need to unleash American energy now," said Pence. "In just one year, President Biden has turned a surplus of American oil and gas into a deficit. All in the name of environmental extremism, and all at the expense of the American worker."

He was critical of the current administration's policies and pointed to what he called failures in achieving energy independence. During the half-hour address, he hit President Biden repeatedly for failing to lead on energy policy.

"On one hand there is a valid critique in that the US is less independent in terms of energy than it would have been under President Trump had he been reelected," said Mark Jones, a political fellow at the Baker Institute. "On the other hand, we're closer to combatting climate change than we would have been had President Trump remained in office."

Pence has been vocal about his thoughts on energy, both as an individual and through his non-profit, Advancing American Freedom. That non-profit is politically active and is airing pro-energy independence advertisements.

TUNE IN: Former Vice President @Mike_Pence delivers an address on the current state of U.S. energy policy and proposes a path for increasing energy security.

This comes as Pence tries to maintain a voice in the Republican Party after Jan. 6, 2021.

"Mike Pence is in a weird spot in the Republican party," said Rick Klein, the political director for ABC News. "Pence is trying to feel his own way. He feels like he has a path in the party either with or without Trump in its future as a potential presidential candidate. It's not clear where the Republican base of voters that Pence would draw on would be. "

Regardless of his own future in the party, Pence was certainly strategic in where he gave today's address about energy's future, in the energy capital of the world.