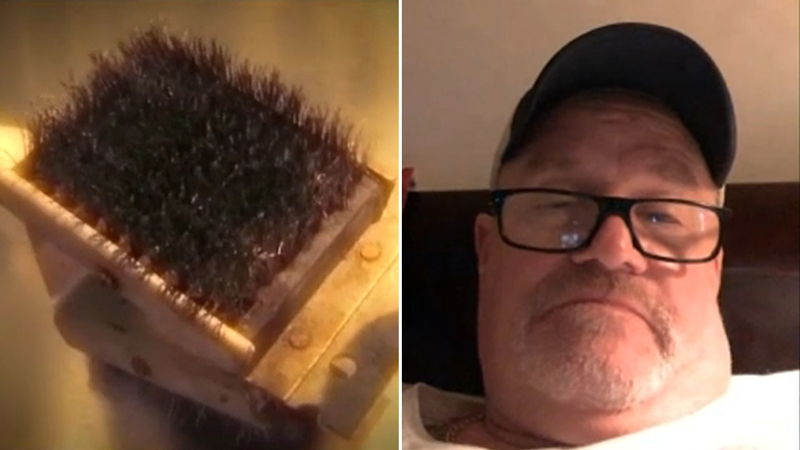 Four years ago, Michael McCreight was enjoying an outdoor pasttime enjoyed by millions of families, an old-fashioned barbecue.

From one hamburger meal, McCreight would have to worry about falling sick, seemingly lasting effects to his insides, and hundreds of dollars in medical expenses.

The Victoria, Texas man talked with ABC13 about the ordeal that caused him to seek treatment for varying issues related to a BBQ brush bristle for years.

To his recollection, McCreight didn't realize he had ingested the tiny steel brush.

"I ate a hamburger. We made some hamburgers like on a Sunday (four years ago), Wednesday, maybe Thursday, I wasn't feeling real good. Felt like...I was coming down with something, a cold, and I got under the covers. (I) was shaking," McCreight said.

When he sought help from emergency responders, he said they dismissed it as a cold and told him to save the money from the cost of an ambulance.

"Then I said, 'Nah, this is more than just a cold,' and I had my wife take me to the emergency room," he said.

After some tests, doctors decided to cut open his abdomen to spray for and detect a foreign object.

"It picked up this tiny little bristle in there, and we didn't know what it was. I thought it might be in there, lingering in there from Vietnam," McCreight, a military veteran, said.

"When I got home, I didn't get to eat for like a month. They kept me in the hospital. When I finally got home and I could eat, they gave me the wire," McCreight added.

After some consultation with family and acquaintances, McCreight realized it was the bristle.

According to McCreight, his intestine was pierced by the bristle "two or three times."

"My doctor told me if I hadn't gotten in there when I did, it probably would have killed me," McCreight frighteningly recalled.

Even though the swift action saved his life, he said he still has to deal with on going health issues, including patching up the holes in his intestine.

And he added that there isn't much legal recourse.

"There is no legal action you can take, because you can't prove one bristle from another bristle, so you are just stuck with the medical bills and everything," he said.

McCreight's story came about as federal health officials are warning against use of those brushes and suggesting safe grilling practices.

A woman is warning about grill brushes after a bristle impaled her tongue.

Consumer Reports tested grill brushes to see which ones could take the heat.