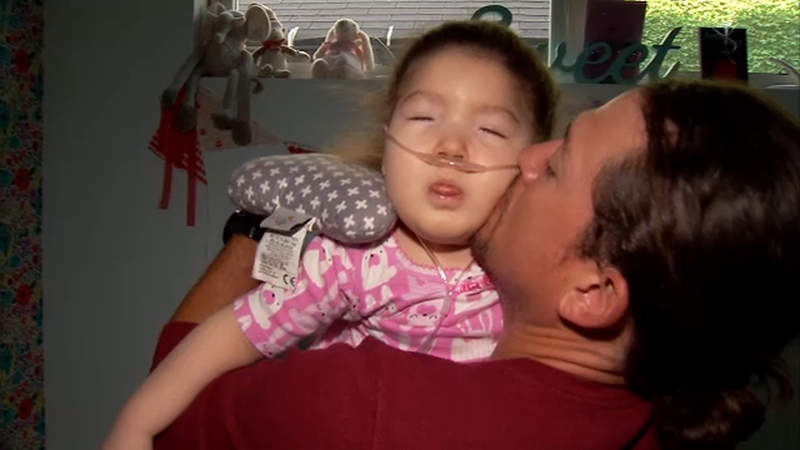 Kelly Cervantes announced the death of their daughter Adelaide on Twitter Sunday.

"The machines are off. Her bed is empty. The quiet is deafening," Kelly Cervantes wrote.

Adelaide was diagnosed with a severe form of childhood epilepsy around the same time that Miguel was cast in "Hamilton." Miguel Cervantes was handpicked by Lin Manuel Miranda to play the leading role of Alexander Hamilton.

The machines are off. Her bed is empty. The quiet is deafening. Adelaide left us early Saturday. She went peacefully in my arms, surrounded by love. Finally, she is free from pain + seizures but leaves our hearts shattered. We love you so much Adelaideybug and forever after 💔💜 pic.twitter.com/bf46YCODM7

Miguel and Kelly Cervantes have been working to raise awareness about epilepsy. Their 7-year-old son Jackson has also taken on an activist role, teaching his classmates about what a seizure looks like.

"We are fighting so that no one ever has to count how many seizures happen in a day," Miguel told Eyewitness News earlier this month.

Kelly Cervantes writes about the family's struggle in her blog Inchstones.

"I want a cure for epilepsy," Kelly has said. "I want the fear that people have of talking about it, I want that fear to end. I want my baby girl to live, and I don't get that. So I'm going to fight like hell for the rest of it."

Eyewitness News reported earlier this month that Adelaide has inspired the 'My Shot at Epilepsy' fundraising campaign. Donations support an organization called Citizens United for Research in Epilepsy, or CURE.

Chicago "Hamilton" star Miguel Cervantes was catapulted him to local stardom, but a heart-wrenching family struggle has kept him grounded and focused on what's most important.

"Our hearts are heavy tonight with the news of Adelaide Cervantes' passing. In her short life, Adelaide did so much to bring attention to a disease we should be much closer to curing," CURE said in a statement Sunday. "No child should have to suffer this way. No parent should have to sit by helplessly and simply watch as epilepsy takes a devastating toll on their child."