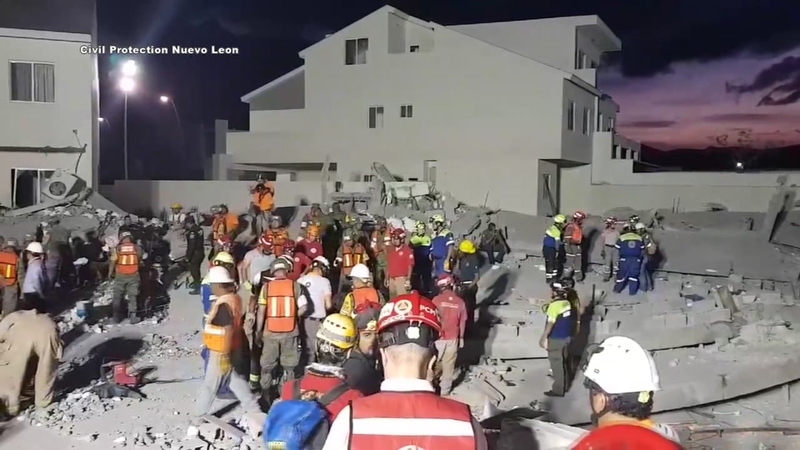 Local council secretary Genaro Garcia told a press conference that 15 people were injured, in addition to the dead, and all the victims are believed to be construction workers.

Work on the three-story structure in this northern industrial hub in Nuevo Leon state was being carried out without the necessary license, authorities said.

The concrete slabs of the structure appear to have pancaked, falling one atop another. Images taken by civil defense officials showed emergency personnel hauling the injured men out of the rubble. About 150 emergency personnel were looking for more people who may be trapped.

In July, a newly opened shopping mall on the south side of Mexico City partially collapsed. A support beam at the Artz Pedregal mall failed, allowing operators to evacuate the mall so that no one was injured when the top floors collapsed about five minutes later. Parts of the mall had still been under construction even though it opened in March.
Report a correction or typo
Related topics:
mexicocollapseconstructionconstruction accidentu.s. & world
Copyright © 2022 by The Associated Press. All Rights Reserved.
TOP STORIES
Timeline breaks down Uvalde shooter's movements day of massacre
16-year-old airlifted to hospital after being shot, deputies say
Protests planned against NRA meeting following Uvalde deadly shooting
3 dead in apparent murder-suicide in NW Harris Co., sheriff says
TX school shooting leaves at least 19 children, 2 adults dead
Our coolest morning in nearly a month
Here's what to know about NRA meeting in Houston
Show More
Uvalde school shooting: What we know about 19 kids, 2 teachers killed
Beto O'Rourke confronts Texas gov. at Uvalde shooting press conference
Houston mayor after shooting in Uvalde: 'Our values are messed up'
HISD staff encourage talking with kids about Uvalde tragedy
Where do Texas gun laws stand?
More TOP STORIES News