Did you see it? Doorbell video captures meteor falling from the sky in Cypress 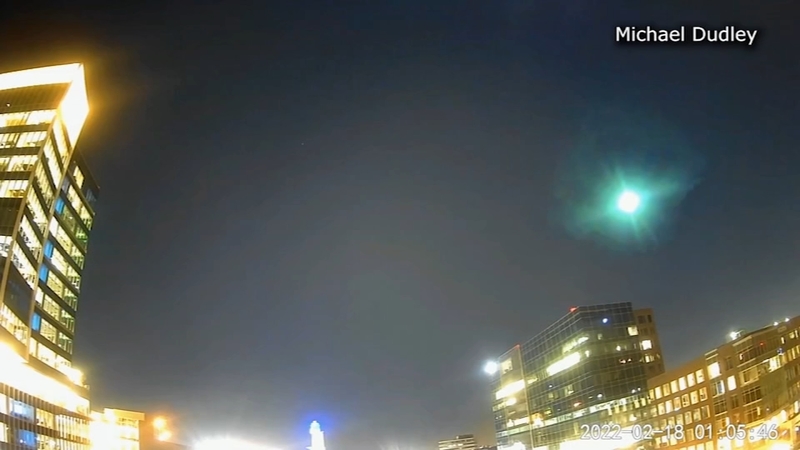 CYPRESS, Texas (KTRK) -- It was a celestial sight causing a sonic boom on social media.

People across the state reported a bright light falling across the Texas sky over Thursday night.

"I definitely sent it to my mom. She was amazed at how clear the picture was and how it picked up. And was surprised that nobody else saw it because it was a breathtaking image."

The video got quite the reaction from the kids we caught up with at the Houston Museum of Natural Science.

"It looks like a rock maybe that fell from the sky," said 9-year-old Dassie Perez.

AMS posted a video from Michael Dudley in the City Centre area.

11-year-old Alayah Flores thought it was fireworks, "It looks like it exploded. Yea, it's sparkling."

The video shows the more prominent and brighter image of the green-colored fireball as it illuminated the sky then disappeared into thin air.

"It just looks like a fireball. I've seen them before." Dr. Larry Pinsky is a Physics Professor at the University of Houston.

Pinksy may not have looked as pumped as the kiddoes, but he says the image is exciting to see.

"Fireball is when the object is big enough to break up into tiny fragments," said Pinksy. "The sky that streaks in the showers are due to things that are almost like pieces of sand."

Pinksy said the fireball can travel quickly through the atmosphere, "Depending on the trajectory of the particle coming in with respect to the Earth's motion, and you can get thousands of miles per second, but then moving, you have speed distances of 30 or 40 miles."

Pinksy said no major meteor showers are currently active but says fireballs can happen any time of the year.