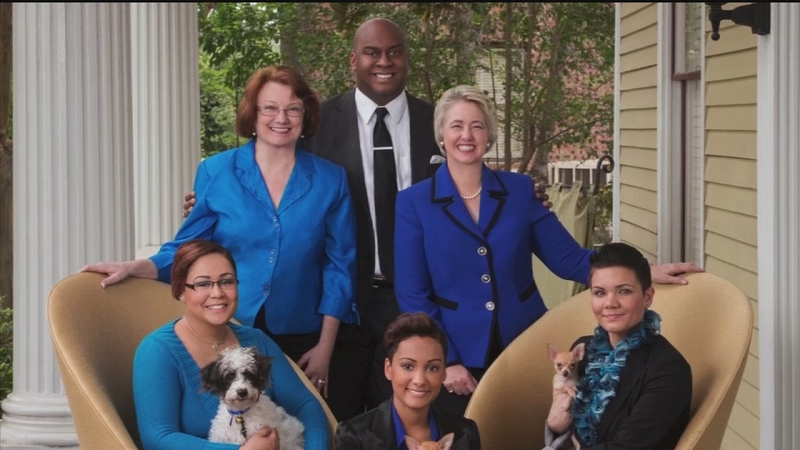 HOUSTON (KTRK) -- As the city's top elected official for nearly six years, Mayor Annise Parker's public stances on the issues are well-known. She'd been in public office for twelve years, but it wasn't until Annise Parker was elected mayor that most Houstonians first saw her family.

"Over the years, people have thought I was part of the Mayor's security team. And so I have to correct them and say, no I'm actually the Mayor's son," said Parker's son Jovon.

Jovon was 16 and gay, with grandparents who didn't understand his lifestyle. Parker, who'd met Jovon at events, spotted him at the Gay Pride Parade.

"I don't know if it was temporary insanity or God was whispering in my ear, but I said enough of this. Here's a key to my house, here's the address. Go there and we'll figure out something to do. And then I went to find Kathy to tell her I'd done it," said Mayor Parker.

A two week stay turned into a year.

"I never saw them as two white ladies until I've gotten a little older, looked back and realized that's an pretty extraordinary set up," said Jovon.

After Jovon, two sisters came next. But adopting them wasn't easy, thanks to their foster parents.

"They had an intervention with her and told her she's seven years old and that she would burn in hell forever if she went to live with us," Parker said.

It took therapy to overcome the girls' fears and when it was time to finalize the adoption, a judge who didn't like gay couples made the process even more painful.

But they've never let bias stop them from doing what they believe is best for their family, like the decision to marry after being together for 25 years. When the Supreme Court struck down the federal ban on gay marriage...

"Our youngest daughter said, 'does this mean you're going to get married now?' And I couldn't think of a good reason why not," said Parker.

But it meant going to California to do it.

"And my mom was there, her sister was there, we had our extended family," said Parker. "It was very small, only 20 in the wedding party."

"We wrote our own vows," said the mayor's wife, Kathy Parker.

"Did it feel different when you said those vows? How did that feel," we asked.

"You could feel the weight of the words," said Parker.

They believe same sex marriage in Texas is just a matter of time. And that Houstonians have proved they are tolerant, by electing her to citywide offices nine times.

"And in fact, when I was elected mayor and there was worldwide media attention, Houstonians were as puzzled as I was that it was such a big deal. I was actually the familiar, safe candidate because everybody knew me," said Parker.

"We're so far out of the closet that we live on the front lawn. Meaning your life is that diverse and....that public, that visible," said Kathy.

As Parker winds down her final term as mayor, her proudest role is parent in a family formed by love.

"Our son is African American, two of our daughters are biracial and our third daughter is Anglo Hispanic," Parker said.

"Was it ever difficult for you, having kids of a different race," we asked.

"Do you feel like they are your parents," we asked.

"Absolutely, because I was a kid who lived on the streets who needed love and protection and they offered it and no one else had," said Jovon.
Related topics:
politicshoustonchildrenfamilyannise parker
Copyright © 2022 KTRK-TV. All Rights Reserved.
TOP STORIES
Preacher reaches out to suspect who stole from his church twice
Carjacking suspect threw 3-year-old out of truck, mother says
Officer shoots suspect in northeast Houston, HPD says
Fifth Ward residents upset over Union Pacific campaign donations
Expert weighs in on when you can buy a car amid chip shortage
Lina Hidalgo suggests DA could have her 'indicted' as political ploy
Santa Fe librarian still trying to make sense of high school shooting
Show More
Houston janitors fight for an increase in hourly pay
Police have no leads on skeletal remains found nearly 6 months ago
Here's why we're increasing rain chances and rainfall amounts
Houston Dash standout expresses excitement on equal pay decision
18-year-old arrested in shooting death of man with cane, HPD says
More TOP STORIES News